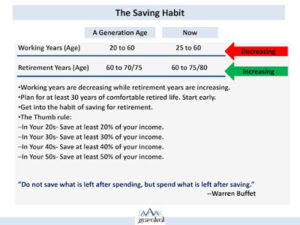 The demonitasion in 2016 led to many an embarrassing moments in many households.

Since time immemorial, the lady of the house has always kept away a part of the money she receives for future expenses. It was not uncommon for her to stash away money in different jars as a saving for different goals, this jar for the family holiday, this for the TV, which needs to be replaced, money in that drawer for her jewelry, that purse for fulfilling the Son’s demands and that one for the daughter’s fashion buys and in between the stack of clothes for any emergency. Savings have been in our culture from the time immemorial. That fateful day in 2016 exposed all the savings and wealth created by the lady of the house and the amount had to be invested in various assets or deposited in a bank. That was the trigger for the start of the investment journey of households and financialisation of assets.

Most people confuse between saving and investment and often use the two interchangeably. At the outset, let us first highlight the difference between the two.

Saving is not fixed; saving is what is left from income after all expenses. On the contrary, investment is, committing yourself to a certain amount every month from your income towards financial goals, irrespective of other expenses.  Convention wisdom and Warren Buffet also rightly says, “ Do not save/invest, what is left after spending but spend what is left after saving/investing”

Investment brings in greater financial discipline and you start saving and investing more.

It has been our experience with most investors that they found themselves saving more after they started investing. When you are not investing, you would spend a lot of money on useless small expenses that could well be avoided. However, after you start a regular investment plan in a fund, just by monitoring it and seeing it grow, you will find yourself having a higher awareness of your financial situation. As a result, you will start spending much less on useless things and start saving even more.

This is particularly true of youngsters. At some stage; money is mostly a way to buy the next mobile phone or planning for your first car. Then, those who start investing-typically in an ELSS for saving tax-suddenly start thinking of money in a different way. They have less to spend, so they become more aware of what they’re spending. When they don’t spend, they tell themselves that it’s better because the money is growing. And then they want to save even more.

I’ve lost count of the number of young people I have seen who behave in a similar fashion. They start with a small saving, typically just for tax saving and then, in no time at all, they imbibe greater financial discipline and start saving more.

Most households have been using their savings for investing in FDs, to get assured returns at zero risk. However they forget the role inflation plays in the entire thing. Money loses value over the years. An Rs 1 lac corpus in 1990 is worth only Rs 13000 odd today; the purchasing power of the money has eroded after inflation has eaten into the value.

The first principle in investing should be that post taxes, the return from that investment should at the least beat inflation. Unfortunately, FDs have been unable to achieve that, but most investors still rely on them as they are thought to be “Safe”.

People feel safety and comfort in Bank FDs or they believe that their money is safe in the banks. Why?

Let’s answer that later – Let us go into history first – Somnath temple was believed to have been built around 4th century AD. In those days there were no banks, so people use to deposit their earnings and savings mostly in the form of gold coins or ornaments in the temples. Maybe in those days also there were thieves around but nobody dared to steal from the temple. So people felt that temples were the safest place to keep their savings. And this lasted for almost 600 years.

In the 11th century, Mahmud of Gazni first invaded and looted the Somnath temple. It was rebuilt and he looted it for 17 times. Even then the people continued to deposit their earnings / Savings in the temple.  Have you wondered why?

Because of habit and cognitive bias.

Now, it was common sense that after being looted for 1st, 2nd, 3rd time, people should have tried to find some alternative to safeguard their earnings /Savings. But, they continued to have faith in the temples. Of course, few might have found some alternative, maybe digging a pit and burying their gold coins and ornaments. But, they were very few who did that or else there was no point of Mahmud Gazni looting the same temple 17 times and always returning with the riches from the loot.

Similarly, people feel that their money is safe in the banks, in FDs, RDs and similar such instruments. Just like the people of Somnath felt that their gold coins and ornaments were safe in the temple.

So, for those who believe that bank FDs are safe, let me tell you that as per the Banking guidelines, your safety is limited and insured for only Rs. 1 lakh whatever may be the size of your deposit in the bank.

It is high time that you come out of this bias and start exploring other alternatives to park your hard earned earnings/Savings, and get returns that can at least beat inflation, albeit with a higher “Risk”.

Over the years, for most households, savings was channelized in the only “investment” that was available, and that was a LIC policy or the good old PPF. Unfortunately most endowment policies have only delivered a return not more than 6% on the investment as against most equity related instruments which have given more than 12% in the last 30 years. What this means is that Rs 5000 monthly SIP @ 6% return would have generated a corpus of Rs 49 lacs as against a corpus of more than 3 timesat Rs 1.54 crores @ 12% return and Rs 2.81 cr at 15% return.

That is the difference between saving and investment and what leads to wealth creation.

The difference in returns is there for you to evaluate. When the returns double from 8% to 15%, the corpus difference is 5 times, i.e. Rs 68.48 lacs to Rs 3.29 cr over a 25-year period. That my friends, is the power of compounding and the real difference between saving and investment.

Most sceptics will dismiss the above by saying they have always lost money in the equity markets or the markets are too risky. The best way to answer that is by studying past history as history has a tendency to repeat itself.

However exactly five after the peak, the market had recovered most of its losses and was at 19783 and after 10 years on 10thJan 2018, Sensex was at—-, thereby gaining more than –% from its previous peak.

Similarly after the major fall, lets say you sold on that day at Sensex level of 7697. If you had bought exactly five years ago on 27thOct 2003; The Sensex was at 4814 on that date and you would have still gained by —-% over the five-year period. And mind you these returns do not include Dividend yield, which on an average works out to more than 1% every year for the Sensex companies since the last 25 years.

The same, in the case of Equity mutual funds, the risk is lower, the probability of loss falls to zero after five years only, as illustrated in the chart below.

Hence Equity investments, especially in mutual funds are not risky in the long run and once you have a horizon of more than 5 years, no asset class can beat equity in terms of returns.

There are certain other parameters to be considered as outlined below while deciding on various options between savings and investment.

Choose wisely, plan your goals, consult your financial advisor, implement a financial plan to achieve your goals, don’t only save but invest your money to get the best results.