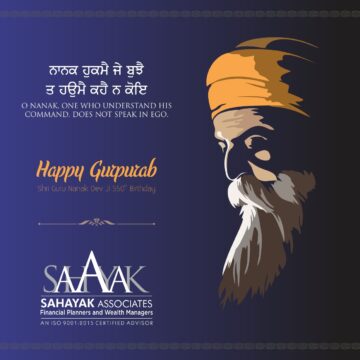 Five centuries after the passing of Guru Nanak Dev Ji, his words still resonate with his followers. As in all areas, his teachings related to money and wealth are also as relevant today as when he originally preached.

On his 550th birth Anniversary today, lets recollect and learn from what he taught about wealth.

In Sikhism, the concept of Maya/ Wealth is understood in two contexts: material wealth and an illusion, which is applied to describe the essence of the world as real but also impermanent.

It is attachment to material wealth, and greed to accumulate more and more wealth, which is strongly condemned by the Sikh Gurus. For example, Guru Amar Das Ji says: ‘mayadhari ut andha bola’ (‘the worshipper of Maya/ wealth is utterly blind and deaf’).

The Sikhs are known to be a hard-working community. In Punjab, India and abroad they have earned the reputation of being successful industrialists and businessmen. In the Sikh diaspora, they have displayed an enormous capacity for rapid achievement.

How do we explain the emergence of an ambitious class of Sikh millionaires?

The answer lies in their commitment to the ethical principles of:

Another interesting concept adopted by Sikhs, is the concept of “Chardi Kala”. It is the central attitude on how one should live their life.

Chardi Kala, also meaning “the positive attitude”, is an equivalence of a mind that never despairs, never admits defeat and refuses to be crushed by adversities. It means “In High Spirits of the Lord”.

Although the Gurus encouraged the creation of wealth, they categorically rejected unethical means to accumulate wealth. For example, the Rehat Maryada (Sikh code of discipline approved by the Supreme Management Committee of Gurdwaras in Punjab) strongly disapproves of gambling as it contravenes the principle of kirat karni (earning one’s living by honest work).

Reflecting on the harmful effects of attachment to wealth, Guru Amar Das Ji further states: “Maya/ wealth is (a) she-serpent; it clings to the whole world. And so, he who serves her, him she eats [GGS: 510].”

The episode of Guru Nanak’s meeting with a wealthy man called Duni Chand is very popular in Sikh tradition; clearly it demonstrates Guru Nanak’s concern about hoarding wealth. It is believed that Guru Nanak once met Duni Chand, who was very proud of his wealth and had the desire to become the richest man in Lahore. Guru Nanak gave a needle to Duni Chand and said, ‘Please keep it with you and give it to me in the next world’.

Duni Chand paused for a while and then said, ‘You know well enough that I cannot carry it to the next world – we cannot take anything with us to the next world!’. Guru Nanak looked at Duni Chand and remarked, ‘If you cannot take this smallest of things with you, how can you carry your millions with you? ‘
Hence, Guru Nanak advised him to share his wealth with needy people and use it for charitable purposes. 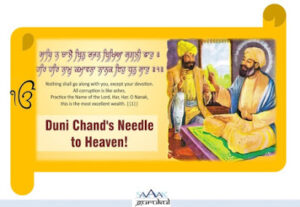 Does it then mean that Sikh teachings are against creating wealth?
Let’s attempt to unlock this riddle by looking at the notion of poverty according to the scripture.

Literally, poverty or “gareebi,” denotes the economic state of a poor person; i.e., gareeb means a poor person. In Sikh teachings, the concept of gareebi/ poverty has been extensively applied to denote humility and the term gareeb has been used for a humble and meek person and this word is proudly used by Guru Nanak Dev Ji for himself. He says: ‘main gareeb main maskeen … tera naam hai adhara’ (‘I am poor and humble, I have only the support of your Name’).

Guru Arjan Dev Ji also applies the term gareeb (Poor) to himself. He writes, ‘for me the meek one, the only true Support art Thou, O, my true Guru.’ [GGS: 398]. 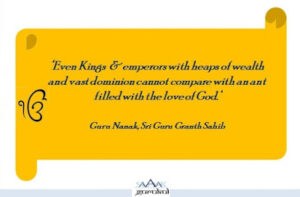 In Sikh teachings the doctrine of Dharmsal sets the agenda for daily conduct. It means that one must earn one’s living by honest and hard work and be prepared to share it with others.

Guru Nanak Ji says: “He who works hard honestly for what he eats, and shares it with others has found the true path.” [GGS: 1245]

It is also significant to note the notion of “Daswandh” (literally, reserving one tenth of one’s earnings for charitable purposes) or tithing as in other religions, is an integral part of Sikh tradition. The practice is widely prevalent among Sikhs, of contributing in the name of the Guru, one-tenth of their earnings, towards the common resources of the community.

This is a Sikh’s religious obligation — a religious requirement or duty; a form of Seva or humble service which is highly valued in the Sikh system. The concept of “Dasvandh” was implicit in Guru Nanak Dev Ji’s own Gurbani in the line: “One who works for what he eats, and gives some of what he has – O Nanak, he knows the Path (1)” (SGGS p 1245)

The idea of sharing and giving is symbolised by the institutions of langar (community kitchen) for the sangat (holy assembly) that the Guru has established.

This giving is a seed. It is a seed of trust that actually has the effect of multiplying your income just as a seed sprouts and grows into more plants.

Another example of one tenth is, one tenth of your day (24 hours) is 2 1/2 hours. Sikhs have the practice of dedicating one tenth of the day, 2 1/2 hours (Amrit Vela) to devotion and meditation. As Guru Ram Das Ji described it, rise before the coming of the dawn, bathe and meditate on God’s Name and inspire others to do this.

As we celebrate the 550th Birth anniversary( Prakash Utsav) year of Guru Nanak Dev Ji, Let’s adopt the fundamental beliefs and pillars of this wonderful religion:

The Sikhs end their Ardas (Prayer) with the following words and so shall I like to end this piece,

(Nanak, with your name comes positivity and prosperity, and with your blessings, there will be peace for everyone, and may everyone prosper.)

Best wishes to you and your family on this auspicious occasion.

May this Gurpurab bring lots of Joy, Prosperity and Happiness to you and your family.

Sandeep Sahni Sandeep is an alum of IIM Lucknow with a Post Graduate Degree (MBA class of 1988). His also an alum of Shri Ram College of Commerce, Delhi University (B.Com. Hons. Class of 1985.) Sandeep’s investing experience and study of the Financial Markets spans over 30 years. He is based in Chandigarh and has been advising more than 500 clients across the globe on Financial Planning and Wealth Management. He has promoted “Sahayak Gurukul” which is an attempt to share thoughts and knowledge on aspects related to Personal Finance and Wealth Management. Sahayak Gurukul provides financial insights into the markets, economy and Investments. Whether you are new to the personal finance domain or a professional looking to make your money work for you, the Sahayak Gurukul blogs and workshops are curated to demystify investing, simplify complex personal finance topics and help investors make better decisions about their money. Alongside, Sandeep conducts regular Investor Awareness Programs and workshops for Training of Mutual Fund Distributors, and workshops and seminars on Financial Planning for Corporate groups, Teachers, Doctors and Other professionals.

Through his interactions and workshops, Sandeep works towards breaking the myths and illusions about money and finance.He also writes a well-read blog;

He has also conducted presentations, workshops and guest lectures at Management institutes for students on Financial Planning and Wealth Creation. He can be reached at:

Your thoughts are vital to the health of this blog and are the driving force behind the analysis and calculators that you see here. We welcome criticism and differing opinions. We will do our very best to respond to all comments ASAP. Please do not include hyperlinks or email ids in the comment body. Such comments will be moderated and we reserve the right to delete the entire comment or remove the links before approving them.