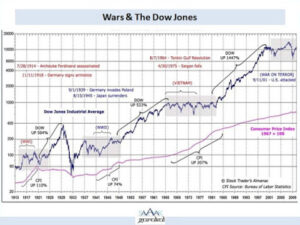 There is an old stock market proverb, which advises “buying to the roar of cannons and selling to the sound of trumpets.”

Nathan Rothschilds old Maxim also states, “that the best time to buy stocks is when blood runs in the streets.”

The stock market reaction during recent incidents like Kargil conflict also prove the above.

At present, Indian financial markets are in a state of mild trepidation. The dastardly attack in Pulwarma, occurring ahead of crucial Lok Sabha elections, has put pressure on the government to retaliate.

There was a heavy retaliation from the Indian side to the 2016 Uri attack. The war of words and politics surrounding the 2019 attack may compel the government to do something. Prime Minister Narendra Modi in a public speech a day after the Pulwarma attack, announced, “a free hand has been given to the army to decide the Indian response to Pulwarma.

This may have implications for the Indian markets; Should investors really panic with the recent escalation in Indo – Pak tensions after the Pulwarma incident? If one looks at the way markets reacted during Gulf War, Pokhran nuclear bomb tests in 1998, the Kargil war in 1999, or the 26/11 terror attacks, the answer is clearly no.

The two Pokhran tests were carried on 11th and 13th May 1998 and the Sensex lost 7% in those three days and recovered 5% in the next three trading sessions.

The market reaction during the Kargil war was even more surprising. The war started on 3rd May 1999 and continued till 26th July 1999; and between these dates, the Sensex gained 38% in a period of less than three months. The Indian stock market was hovering around 3600’s when the news of incursion in Kargil initially came in. It dipped to around 3300 at the start of May but then kept on going up and ended around 4500 by the end of war. But, one should also remember that, 1999 was early stage of the dotcom boom, so global sentiments overshadowed Indian war and thus it did not have a large impact but that may not be valid now.

After the 26/11 attacks, the stock markets were closed the next day, and when they re-opened on November 28, most people feared disaster on that day, but after a bad start the Sensex actually gained 66 points, ending up at 9093. By the end of December it climbed further to 9647, and then crossed 10000 in Early January.
The reaction of Foreign investors after the 26/11 attack was also very different. From the start of 2008, they had pulled $13.5 billion out of Indian markets, sending the Sensex crashing from a peak of 21,000 to barely 9,000. However on Nov. 28, in the middle of the Mumbai gunfight, they bought $151 million worth of Indian stocks and bonds. And then in the first 12 days of December, they injected another $524 million into India’s equity and debt markets.

There is a similar pattern for each conflict involving the United States.

In 14 incidents dating back to the attack on Pearl Harbor in December 1941, the median one-day decline has been 2.4%. The market shocks, which also include the September 11th terror attacks and the 1962 Cuban missile crisis, lasted eight days, with total losses of 7.4%; The market recouped its losses 14 days later.

Similar patterns of decline occurred during several Middle Eastern conflicts such as Desert Storm in 1991, the Iraq War in 2003, and the Syrian Conflict in 2011. Leading up to each of these events, the market dropped, but recovery happened shortly thereafter.

The US figures must be read with the caveat that the US was pitted against less powerful countries and the conflicts were not taking place on American borders, which would have carried a greater risk to industrial capacity and other key economic factors.

Things would be quite different in case we were to see an escalation of hostilities between India and Pakistan.

Short-term conflicts typically have a short-lived impact on the stock market. As such they shouldn’t change an individual’s investment philosophy or cause one to “abandon ship.”

However, the Indian markets are afraid that retaliation from the Indian side may snowball into a bigger battle and full-blown conflict.

Major wars fought between India and Pakistan have rarely been a weekly affair. The First Kashmir War started in October 1947 and the ceasefire was declared on the night of January 1, 1949. The Indo-Pakistani War of 1965 was an outcome of skirmishes that took place between April 1965 and September 1965. The 1999 Kargil conflict was two months long (May–July 1999). Only, the Indo-Pakistani War of 1971 was one of the shortest in history as it started and ended in 13 days.

One of the most harmful economic effects of war is a supply shock. A major shock in the supply of goods or labor can severely impact economic productivity. Sources of these setbacks include economic sanctions, manufacturing destruction, infrastructure damage, etc.

Another typical impact of major conflicts is inflation. This is due to the increase in government spending through various financing methods. While inflation may be good for reducing debt burdens, high inflation has many harmful effects, such as exchange rate impact and erosion of international competitiveness.

From a foreign funds view, of late, FPI/FIIs have been showing some renewed interest in Indian stocks in 2019, after pulling out around $ 5 billion in 2018. Global factors and Wars do impact sentiment and flow of foreign capital to any country including India. While foreign funds know military disputes persist between India and Pakistan, a threat of aggression in the region could hinder the development of the Indian economy and also affect the inflow of both FPI and FDI

A prolonged conflict will have a bearing and will affect the markets considerably, whereas a limited military exchange will help market recover faster.

To put things in perspective, global markets have survived two world wars, Vietnam, the Gulf Wars, 9/11 attacks in the US, and many other military conflicts around the world. In the recent past, India too has survived Kargil, attack on Indian Parliament, 26/11, Uri and many such incidents.

No one likes a war, including markets. But they are part of reality and markets eventually learn to live with them.

As can be seen from the examples, the traditional notion that War can lead to a stock market crash is not true. Long term trend and trajectory of the market is what precedes everything else.

In an interview with CNBC on 3rdMarch 2014 Warrant Buffet quoted:

” During World War II the stock market advanced. The stock market is going to advance over time.” What Warrant Buffet was emphasizing is that the longer term trendof the market takes precedence over everything else. Yes, there are going to be short term jerks in the market on news of war, but the trend of the market will take its due course.

It is tempting to extrapolate past wars and other such incidents like elections etc and predict the course of the Sensex in the next few weeks or months. But in the short term, markets have a way of charting a course of their own and having bouts of volatility due to various reasons, it is the long term and the trend which finally matters.

For an investor the best thing to do is to look at his investment goal and investment horizon. If long term, don’t panic and continue your investments and SIPs.

As always, it is prudent to seek advice from an experienced investment professional and advisor, which will help you plan and navigate your own voyage through the uncertain time.