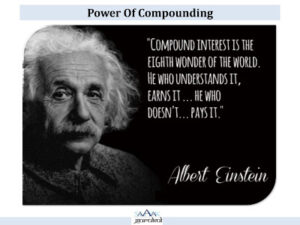 Simply put, compounding refers to the re-investment of income at the same rate of return to constantly grow the principal amount, year after year.

Compounding does wonders in the long run not because of time value of money but because return gets added to the principal at the end of every year thus increasing the principal and reaping the benefit of return on the increased principal.

The compound effect is the strategy of reaping huge rewards from small, seemingly insignificant actions. Even Albert Einstein described compounding as ‘The most powerful force in the universe‘.

I have always relied on some of my favourite stories to highlight   the power of compounding.

The story of the “Peasant and the King’ comes from the book ‘Classics – An Investors Anthology.”

There was the king who held a chess tournament among the peasants and asked the winner what he wanted as his prize. The winning peasant, in apparent humility, asked only, that a single kernel of wheat be placed for him on the first square of his chessboard, two kernels on the second, four on the third-and so forth and the kernels be doubled on every square till the 64thsquare. The king thought, what a fool, what a small gift he is asking for and fell for it. The entire stock in his granary was soon exhausted and he had to import grain from Argentina for the next 700 years. Eighteen and a half million trillion kernels [18,500,000,000,000,000,000] or , if each kernel is a quarter inch long, to stretch to the sun and back 391,320 times. That was nothing more than one kernel’s compounding at 100 percent per square for 64 squares.

Lets use another example, What if you had two options, Take Rs 100 lacs on day 1 or a magical one rupee, which will double every day for 31 days. What would you opt for? Do a mental calculation, Calculate for yourself and decide now which option you want; Rs 100 lacs may seem a lot but Re 1 doubling every day for 31 days would amount to Rs 107.37 crores on the 31stday.

To highlight the power of compounding further, let me share an example of our interaction with a lot of young people. When we tell some of our young friends, aged 25 years, that lets plan for a retirement corpus of Rs 100 crores for you at the age of 65, they are awestruck and can’t even think of achieving that in their wildest dreams. However, if we tell them that it will only take a SIP of Rs 44000 per month or Rs 5 lacs per year @ 15% return to achieve it, they are dumbfounded as they can almost afford it. Going further, we tell them it will only take a SIP of Rs 17500 to start as long as you keep on topping it up with 10% every year as your income increases and they look at us as if we have come from another planet. But that my friends is not rocket science but the Power of Compounding, which we just don’t comprehend.

In another example, it is said that Peter Minuit purchased Manhattan Island for $24 worth of trinkets in 1626. A letter written by Dutch merchant Peter Schaghen to directors of the Dutch East India Company stated that Manhattan was purchased “for the value of 60 guilders” in goods, an amount worth approximately $1,050 in 2015 dollars. For this, Peter Minuit received 22.3 square miles which works out to about 621,688,320 square feet. While on the basis of comparable sales, it is difficult to arrive at a precise appraisal, but lets say a current rate of $1500 per square foot, will give a current land value for the island at close to a $ 1 Trillion.

To the novice, perhaps this sounds like a decent deal.

We all get impressed by the absolute returns of real estate over a period of time, but to check the claims, lets look at it in another way.

A friend bought a property for Rs 30 lakhs in Mid 2002. He sold the property at Rs 1.5 Crores in 2018; a profit of Rs 1.2 Crores on an investment of Rs 30 lakhs. Many of my other friends were super impressed with the profits, which this friend made; but I was not as impressed as my other friends.

Let me explain why; While this friend’s absolute returns were good, Lets use the metric of Compounded Annual Growth Rate (CAGR) to evaluate the performance of investments. The CAGR of my friend’s investment was 10.6%. While this was more than returns from FD or other risk free investments, top performing diversified equity mutual funds over the last 15 years have given more than 15% CAGR returns. If he had invested in Equity Mutual Fund, Rs 30 lakh would have grown to Rs 2.44 crore @ 15% CAGR over 16 years.

That is the power of Equity Mutual Fund and the kind of growth you can expect if you invest regularly in the right asset class. Don’t be impressed by absolute returns, always evaluate the return on your investment on CAGR basis to get the right picture.

Historically, inflation has been in the range of 6-7%. Based on historical prices, equities have given a return of 12%-18% and even averaged above 20% per annum during the period 1980 to 1996 and then again between 2004-2007. Given that equities can deliver a CAGR of 12-15%, your equity portfolio will beat inflation, delivering a healthy 4%-7% post-tax, post-inflation, real returns.

If you invest in a Bank Fixed Deposit earning an interest rate of 7%, after 20 years, Rs 1 lakh would grow to Rs 3.87 lakh. This is about half the corpus of the investment earning 10% per annum. If you were able to invest in a product that earned 14% p.a., the Rs 1 lakh investment would now be would worth a whopping Rs 13.74 lakh.

Even a SIP of Rs 5000 per month invested in different asset classes giving different returns also translates into major difference in corpus over an investing period of 30 years as highlighted below.

If one has time to learn just one thing about investing, then it should be the power of compounding.

No one understood and used the power of compounding better than Mr Benjamin Franklin. The noted American revolutionary, diplomat and inventor was also the one to advise: ‘A penny saved is a penny earned’

Before he died in 1790, Mr Franklin bequeathed the cities of Boston and Philadelphia 1000 sterling ($2200 approx.) each. However, he put a few conditions. The interest was to augment the principal continually, and at the end of 100 years, 75% the fund was to be expended for “public works”, and the balance was to be compounded for another hundred years. Mr Franklin had prescribed an annual rate of just 5%.

In 1990, when the cities received their balances after 200 years, the combined bequest had grown to $6.5 million!!

This is certainly a testament to the power of compounding, the very thing Ben Franklin counted on and wanted to demonstrate.

The key to understanding how compound interest works is to realize the role of time. The earlier you push the compound interest button, the more impressive the long-term results. Give maximum time to your investment to get the most out of the power of Compounding as is illustrated below.

It might sound incredible, but despite Mr Y investing about Five times the money that Mr X did, Mr Y ended up retiring with only about half what

Mr X was able to save.

How in the world can we explain the massive difference? This is only due to the power of compounding because Mr X has given more time to his investments to grow.

Early investing is very much like growing a tree; if you can take good care of it at the start, it will take care of itself later.

Growing your wealth is similar to growing the new tree.

Given lots of tender care, your small baby steps will become your Mighty Money Tree. Your investments in first 5 years out of a 30 year period makes the final 50% corpus and the investment made in the balance 25 years makes the rest of the 50% corpus. That means, the initial 16% tenure makes 50% corpus and later 84% tenure builds rest 50% corpus.

Money might not actually grow on trees, unless you plant your own Mighty Money Tree, and plant it very early!

Translated into a human lifetime, it means that starting to save at the age of 30 instead of 50 can mean retiring with four times the wealth.

Credit cards, mortgages, loans and other debt have interest payments on top of principal, which can accumulate to an unmanageable mountain of debt. Interest is paid either annually, monthly or a term in between. The higher the compounding frequency, the higher your accumulation of interest. Taking steps to reverse compound interest is the first step to debt management.

One of the most common debt trap is the payment of minimum charges on your credit card bill, which will only keep increasing your debt and nothing else. If you just made the minimum payment, according to the credit card company’s formula, at a 20% interest rate it would take 20 years to pay this bill. In addition, you would spend many times more on interest payments than you did on the entire expense you had incurred.

(Incidentally, the credit card interest in India is close to 40%.)

Rs 112000. If he compounds your interest monthly you would owe him

If you borrow money @ 12% and pay only the interest every month, like in a Cash Credit account, you would have paid the amount equaling the principle amount in 6 years and the principle will still be outstanding.

You must begin by becoming aware of the choices you are making and how those choices impact your future. Things don’t just happen to you in life, they happen because somewhere along the line you made a choice that led to that moment.

To find radical change in every area of your life, you only need to take a series of tiny steps, but you need to do so consistently over a long period of time to improve your life.

Start your investment journey early and reap the benefits. Consult your financial advisor today to reap the power of compounding to your advantage.