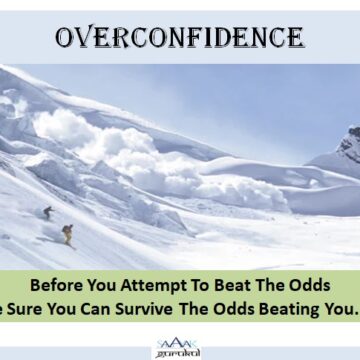 They say, “Confidence is good but Overconfidence always sinks the Ship” and the first thought that comes into our mind is the Sinking of the Titanic. TITANIC Was called the “UNSINKABLE” Ship.

An unknown Titanic crewmember is reported to have once said to embarking passenger, Mrs. Sylvia Caldwell, “God himself could not sink this ship!”

That was overconfidence and we all know what happened to Titanic on its maiden voyage.

The overconfidence effect is a well-established bias in which a person’s subjective confidence in his or her judgments is reliably greater than the objective accuracy of those judgments.

In 2011, David Dunning wrote about his observations that people with substantial, measurable deficits in their knowledge or expertise lack the ability to recognize those deficits and, therefore, despite potentially making error after error, tend to think they are performing competently when they are not—an assertion that has come to be known as the Dunning–Kruger effect. In the field of psychology, the Dunning–Kruger effect is a cognitive bias in which people mistakenly assess their cognitive ability as greater than it is. It is related to the cognitive bias of illusory superiority and comes from the inability of people to recognize their lack of ability.

The overconfidence bias is the tendency people have, to be more confident in their own abilities or situations, such as while driving, running a business, in investing or in sports and games etc., than is objectively reasonable.

Surveys reveal that the vast majority of people rate themselves “above average” among their peers when it comes to positive traits, such as driving ability, employment prospects, in elections or life expectancy. In surveys, 84 percent of Frenchmen estimate that they are above-average lovers. In another survey, 93 percent of the U.S. students estimated to be “above average” drivers.

We routinely underestimate the likelihood of falling ill for instance; yet, overestimate the probability of good events happening to us, which goes a long way to explaining lottery ticket sales. We also overestimate our ability to earn money and a main retirement mistake, which most people make, is overestimating earning years.

Most Entrepreneurs deem themselves to be different; they believe they can definitely beat the odds. In fact, entrepreneurial activity would be a lot lower if the overconfidence effect did not exist. For example, every restaurateur hopes to establish the next Michelin-starred restaurant, even though statistics show that most close their doors after just three years.

In a wonderful book I read recently, “Factfulness” by Hans Rosling, He did a small survey and asked some simple questions about Global trends, questions like, What percentage of people around the world are living in poverty, How many girls in low income countries finish primary school, what is the Life expectancy of the World today and so on. He proved how we systematically get the answers wrong and a majority gets them wrong irrespective of background, profession, education, etc. He went on to say that a Chimpanzee choosing answers at random could outguess journalists, Nobel laureates & Investment bankers.

Overconfidence results from the illusion of knowledge, which is the tendency in people to believe that the accuracy of their forecasts necessarily increases with more information. This however is not necessarily the case, given that information is not the same as insight.

Today, investors are bombarded daily with financial information, and every twist and turn in stock markets is discussed at length especially on TV channels and social media. This deluge of information encourages some investors to make frequent changes to their portfolios. However, studies suggest that these investors are in fact overtrading and virtually guaranteeing themselves mediocre returns after transaction costs and taxation.

One explanation for overtrading is that investors feel motivated to master the environment -The illusion of control, which is the tendency to overestimate our ability, to influence events over which we have little control.

As a result of the overconfidence bias, the investors tend to be more active traders than required. They overestimate their abilities to value companies, predict movements, growth and move in and out of positions quite rashly and very frequently.

Overconfidence traps the investors in a vicious circle wherein they buy when they are confident, sell when they are afraid, completely miss the recovery part and jump back into the cycle as soon as possible. This makes them more risk-prone and also mitigates their gains.

Optimism is a perfectly sensible strategy for life but can be hugely problematic when investing. One of the Golden Rules of Investing is: Don’t be overconfident. Every investment mistake is invariably rooted in overconfidence.

Overconfidence is called “the most significant of the cognitive biases.”

– The most damaging of biases that affect an individual is overconfidence.

No problem in judgement and decision-making is more prevalent and more potentially catastrophic than overconfidence. Overconfidence has been the main cause for, among many a disaster right from, the sinking of the Titanic to the subprime mortgage crisis of 2008 and the recession that followed it and many more such disasters.

What’s surprising is that the experts suffer even more from the overconfidence effect than lay people do. Let’s say if asked to forecast oil prices in five years’ time, an economics professor will possibly be as wide off the mark as a bus conductor. However, the professor will offer his forecast with lot of conviction and logic.

Another common trait due to overconfidence is the belief that, “This cannot happen to me, I have not done anything wrong, I have access to better information, so how can I be punished or make a loss,” forcing the individual to take greater risks and getting into unchartered territory.

Recently, this was evident in Jet Airways, where individuals who were invested in the stock refused to exit because of their supreme confidence that the government will not allow such a big airline to fail. Same was the case with IL&FS, Yes Bank, DHFL & ADAG Stocks and what did the investors end up doing? They were trying to average the stock at every fall in price and ended up losing a large chunk of money.

Overconfidence gives us the courage to act on our misguided convictions and this leads to suboptimal investment behaviour.

Why do we fall prey to the narrative of overconfidence? It is mainly because we don’t want to be proved wrong, because we are innately averse to uncertainty, because we have an extremely high opinion of our intuition and knowledge.

Two behavioral traps especially set up an investor for overconfidence: The Hindsight bias and the Extrapolation Bias.

“Much like our human predisposition toward nostalgia about the past, where we only remember the good times and gloss over the bad, investors likewise tend to take a nostalgic view of their past winners but forget about their past losing investments,” That’s hindsight bias.

Hindsight bias can feed confidence levels further. By extrapolating recent experience into the future, often based on limited data, investors are often guilty of making confident predictions that are regularly proven wrong.

I know of many investors who may have made major amount of money on certain stocks over a long period of time but ignore the gross underperformance in the last 5-7 years in the same stock even though structurally that business model may no longer be relevant. They still hang on to the stock out of nostalgia and hope that it will outperform again. Airtlel, Castrol, PNB are just some examples of shares which were once the best of Blue Chips, but have not done anything in the last 10 years and have grossly underperformed.

Indeed, our collective bias towards overconfidence in good times seems to sow the seed of our subsequent downfall. A leading Economist once observed, “Stability begets instability”.

This can lead to extrapolation bias, by creating the illusion that you can predict market performance accurately. This behavior can become more pronounced if the portfolio has made significant gains in recent times.

Here, you need to remember, “Just because you were right a few times doesn’t mean you’ll be right again.”

Overconfidence, especially the kind that doesn’t reflect reality, is “the sin you don’t want to be guilty of when putting your money at risk.”

Overconfidence also causes investors to seek only evidence confirming their own views and ignore contradicting evidence leading to the Confirmation Bias.

Being overconfident of our investment skills can lead to many investment mistakes like:

Your best bet to overcome the pitfalls of overconfidence is not to act in haste, but to slow down your thinking, simply become aware of the pitfalls, and question whether you’re being overly optimistic.

Consider the possibility that you could be wrong. Listen to evidence that could possible change your mind. Be ruthless with your investment thesis; be open-minded and open to criticism of your hypotheses.

Finally, Consider the consequences of being wrong. Your first and foremost job should be not to lose money, Put your ego aside and balance your risk and return.

To avoid overconfidence in equity investing, you must remember that financial markets are not static but highly dynamic. Even the seasoned traders and fund managers, with access to the best research reports, algorithms and investment models, do not perform the best, at all times. Therefore, it is very important to remain grounded and realistic.

One of my favorite sayings is that “It isn’t what a man doesn’t know that tends to get him in trouble, but what he knows for sure but isn’t true, that gets him into maximum trouble.

British philosopher, Bertrand Russell put it in another way, “The trouble with the world is that the stupid are cocksure and the intelligent are full of doubt.”

Averages never lie, Reversal to the mean is a time-tested formula, valuations matter, overconfidence kills; be a wary investor and you will never lose.

An experienced and balanced Financial Advisor is the best remedy for overconfidence while investing. He will surely put forth the different perspectives, make you aware of the risk and return matrix and keep you at arms length from excessive risk and the perils of overconfidence.

Sandeep SahniSandeep is an alum of IIM Lucknow with a Post Graduate Degree (MBA class of 1988). His also an alum of Shri Ram College of Commerce, Delhi University (B.Com. Hons. Class of 1985.)Sandeep’s investing experience and study of the Financial Markets spans over 30 years. He is based in Chandigarh and has been advising more than 500 clients across the globe on Financial Planning and Wealth Management.He has promoted “Sahayak Gurukul” which is an attempt to share thoughts and knowledge on aspects related to Personal Finance and Wealth Management. Sahayak Gurukul provides financial insights into the markets, economy and Investments. Whether you are new to the personal finance domain or a professional looking to make your money work for you, the Sahayak Gurukul blogs and workshops are curated to demystify investing, simplify complex personal finance topics and help investors make better decisions about their money.Alongside, Sandeep conducts regular Investor Awareness Programs and workshops for Training of Mutual Fund Distributors, and workshops and seminars on Financial Planning for Corporate groups, Teachers, Doctors and Other professionals. Through his interactions and workshops, Sandeep works towards breaking the myths and illusions about money and finance.He also writes a well read blog; https://sahayakgurukul.blogspot.com https://www.sahayakassociates.in/resources/our-blogHe has also conducted presentations, workshops and guest lectures at Management institutes for students on Financial Planning and Wealth Creation.He can be reached at:+91-9888220088, 9814112988sandeepsahni@sahayakassociates.com         Follow us on:
www.sahayakassociates.in  www.facebook.com/sahayakassociates www.twitter.com/sahayakassociat,https://www.instagram.com/sahayakassociates https://sahayakgurukul.blogspot.com https://www.sahayakassociates.in/resources/our-blog