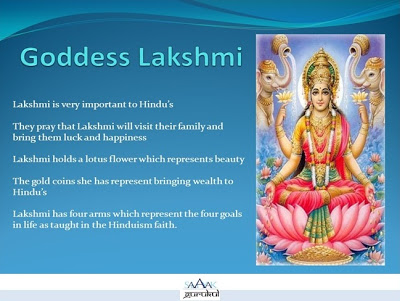 Money and God seem poles apart, but are they?

“In God, We Trust” is the official motto of the United States and first appeared on the Two-cent piece in 1864 and has appeared on paper currency since 1957.

Mythology and Money; Most of the cultures of the world have Mythology associated with Money.

In Indian mythology, The God of wealth is Kubera& is known as Dhanpati. There is a misconception that Lakshmi is the Goddess of wealth; Lakshmiis the Goddess of fortune, power, luxury, beauty, fertility, and auspiciousness. She holds the promise of material fulfilment and contentment.

Kuber worshiped Lord Shiva – the creator of this universe. Being impressed by his rigorous prayers, Lord Shiva decided to meet Kuber. So, he appeared in front of him and granted him the guardianship of world’s entire wealth.

As the God of wealth and material, Lord Kubera’s responsibilities are to distribute them while the responsibility of creating wealth is with Goddess Lakshmi.

Kubera has three famous half-brothers, Ravana, Kumbhakarna and Vibhishana. All three find mention in the great Indian epic, Ramayana. His brother Ravana, by practising austerities, obtained the boon of invincibility from Shiva and so was able to defeat Kubera and seized Lanka and the chariot, Pushpak.

As Lanka could not be restored to Kubera, Vishwakarma, the god of architecture, built Kubera a palace in a fabulous hidden city in the Himalayas called Alkapuri, which it is said has all the stored-up wealth of the Earth, and much sought after destination by explorers and archeologists even today.

In Tibetan Buddhism, there are five different colours of God of Wealth – Yellow Jambhala, Red Jambhala, White Jambhala, Black Jambhala and Green Jambhala. (Jambhala is the Buddhist form of the Hindu God of Wealth)

Ancient Greek theology was based on the assumption that there were many gods and goddesses. There was a hierarchy of deities, with Zeus, the king of gods, having a level of control over the others, although he was not omnipotent, while some deities had dominion over certain aspects of nature. Plutos (or Plutus) was the God of wealth. In earlier Greece, which was agriculture-based, he was associated purely with the bounty of rich harvests. Later, he came to represent wealth in more general terms.

The Romans adopted much of the Greek culture and mythology, In Roman mythology, Pluto, the Roman god of the Underworld, is also a God of wealth, as the lord of all the metals and riches that lie under the ground.

The word Calendar is also related to Money; the word calendar came into English language from the Norman French language of the invaders: calender or calendier. They had borrowed it from the language of the ancient Romans; Latin kalendarium meant ‘account-book‘. The first day of the month, called kalendae, was when accounts were due and debts had to be paid,so it was all to do with money!

Mahabharata, one of the greatest epics in Hindu mythology, is known to offer valuable lesson on life, relationship and success. The epic also offers helpful tips for making profitable investments. Here are the some investment tips from the Mahabharata:

Knowledge is your ‘Divyastra’

According to Hindu mythology, though Lakshmi and Saraswati are sisters, Lakshmi follows Saraswati. In other words, wealth follows knowledge.

As investors, we need to have full knowledge and be educated about mutual funds and the “Lakshmi” – returns would follow. We also need to keep ourselves updated on new developments.

Arjuna, Bheema and Yudhisthra undertook long hard journey to obtain Divyastras, strength and strategic wisdom much before the actual battle of Mahabharata. Arjuna kept learning various skills all his life. To learn more is to grow more and achieve more.

Knowledge in investing helps us in growing our investments.

Unfortunately, not many are aware of the various investment options, the inadequacy of knowledge amongst investors and potential investors acts as a barrier in achieving their goals or creating wealth.

Taking a cue from the epic Mahabharata, it could be said that ‘knowledge’ is no less than a ‘Divyastra’ that may help us in achieving our financial goals, securing the future of our loved ones and will help in creating wealth.

During one of their training sessions, Dronacharya took the young princes to an open area and gave them the task to shoot at a bird’s eye from distance. While everyone answered seeing the bird, trees, its feathers, ground, etc. all Arjun could see was the bird’s eye. Hence, he shot down the bird with one arrow.

To achieve ones financial goals, one needs to identify the goals and stick to them. One needs to ignore the market volatility regardless of how much the noise penetrates into your mind and tries coercing you to give up. It is also advisable to identify mutual fund schemes according to the time horizon of your goals. Investors should monitor their portfolio as deemed fit to stay updated and not panic during short-term volatilities.

Draupadi in her previous birth had asked Lord Shiva for a boon. She had asked for a husband who should be righteous, brave, accomplished, handsome and intelligent. Shiva said that it was impossible for one man to have all these qualities and hence she will have five husbands. Yudhistra was the righteous one, Bheem was full of strength, Arjun an accomplished archer & warrior, Nakul was famous for his looks & Sahdev was intelligent, the strategist.

There are many investors who only believe in the power of equity, or real estate or Bank FD, etc. and put all their money in just one asset class whereas an average investor is always better off diversifying. It is important for your portfolio to have safety of debt, returns of equity, steadiness of a debt-free house and tiny comfort of gold.

In the battle of the Mahabharata, the Pandavas consisting of just five brothers had eventually defeated the Kaurava clan of 100 brothers. This shows it’s easy for a leader to communicate and be able to head five people than a team of 100!

In investments too, it gets difficult to keep a track of too many portfolios. Hence, it’s suggested to stick to schemes or products with a focused portfolio consisting of less number of stocks, say 20-25 stocks. This is an example that over-diversification does not create value.

Shishupal, the cousin of Krishna was destined to die at his hand, which was a known fact. Shishupal’s mother asked Krishna for a vow to pardon his 100 mistakes before killing him, to, which Krishna agreed. During the RajSuya yagya being conducted at Indraprastha, Krishna finally killed him with his Sudarshan Chakra after pardoning his misdemeanour for 100 times.

Just like Krishna, ignore the small mistakes, you also don’t sell a stock or exit a mutual fund scheme during a market fall or some volatility. Give it time and only when it is consistently underperforming and does not fit into your investment plan, kill it or exit from it.

Shakuni was an expert at the game of dice. He conspired to call Pandavas to Hastinapur and then helped Duryodhana win the game of gambling against them. Yudhistra lost not only his kingdom and other assets but his brothers and wife too. On being restored their wealth by Dhritrashtra, they again lost everything in the second round and were sent to exile for 13 years.

In the investment world too, the same theory can be applied. Being an investor, if you are unable to identify the risk and returns or alternative investment options available; just learn to keep it simple. Do not get enticed by the lure of quick returns or fancy products and focus instead on good investment options. It’s still okay to earn less, but it’s not okay to lose your corpus.

This is also a prime example of the risks of gambling. Even in investment world, short term trading is akin to gambling. Learning from this example, we should be aware of the pitfalls of aggressive trading or investing in fancy high-risk investments or getting lured by ‘tips’.

All investors should have a “saarthi” or advisor

Krishna was a guide, ‘saarthi’, to the highly skilled Pandavas. Under his guidance, the Pandavas managed to defeat Kauravas inspire of the latter being more in number.

Similarly, every investor should have a Krishna (Saarthi) who shall help you overcome Behavioural biases and guide you in your investment journey to achievement of your financial goals.

Abhimanyu the son of Arjun knew how to enter the chakravyu (a specialised wartime formation) but not to exit it. This led to his death during the Mahabharata.

The story highlights the importance of choosing research-backed investment. Investing in an investment product without extensively analysing it and understanding the pitfalls can put your wealth at great risk. Only when you understand both the probable returns and associated risks should you consider investing in any product.

Do not compete: focus on learning

On his deathbed when Karna asked Krishna why people respected Arjun despite he (Karna) being a more proficient archer, Krishna explained to Karna that while Karna was focusing on beating Arjun at archery, Arjun was simply focused on learning the art.

Similarly, instead of competing with peers, you should focus on developing skills to get the best returns and emerge victorious.

Krishna in “Bhagwat Puran” had the power to be accessible to all his 16,108 wives simultaneously so that none of his wives felt alienated. Similarly, nowadays with the help of technology, you can access all the information that you want for all kinds of investment products available to make the right investment decision.

Money – We all love it, want it and spend it like it is.

Mythology is replete with stories that greed doesn’t pay in the long run; When Marcus Crassus (Roman Legend), one of the richest people in human history died, they poured molten gold in his throat, to punish his greed.

The Indian mythological approach to prosperity and fulfillment warns against the relentless pursuit of the goddess, as it will result in conflict. Rather our mythology through several tales propounds that, we have to give in order to get, we have to satisfy the hunger of others in order to satisfy our own. If we learn and practice this fundamental truth, Lakshmi will enter our homes and always remain in our lives.

People also offer prayers to please Lord Kuber, to earn wealth in life by placing and worshipping, The Kuber Yantra. This is a metal plate inscribed with conciliation of Kuber – the wealth of god. The yantra has a total of 72 rows and columns. According to beliefs 72 is a lucky number that increases prosperity and wealth in life.

This yantra brings a lot of energy and opens a way to bring wealth into our life and you can place the Kuber Yantra at home and/or office on a flat surface or hang it in North or East facing direction and the yantra must be at eye level. Another reason people please Kuber – The Wealth of God, is to gain the wealth you have lost.

We can only advise this; learn and gain knowledge, talk to your financial advisor, take the right steps, plan and start early, have patience, keep it simple, review regularly and achieve your financial goals.

May the Gods of Wealth always shower their blessings on you!