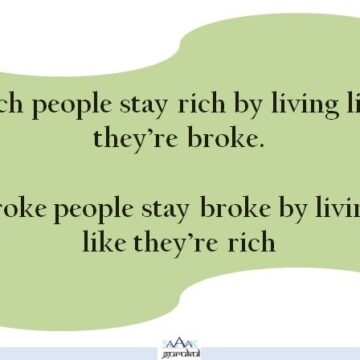 Learning how to make millions is one thing, but mastering the art of keeping that fortune intact is a different task. Many people get rich, only to blow their earnings in a matter of years. We have also seen successful businesses and corporations going into oblivion in a short time.

There is an old saying, “Getting rich can be the biggest impediment to staying rich.”

Andy Grove, Intel’s founder, put it this way: “Business success contains the seeds of its own destruction. Scrappiness and the ability to think differently turns into complacency and the desire to keep things the same.”

It’s why the composition of Stock market Index companies changes so much over time;our very own Nifty with 150 changes in the past 18 years is very different from the index that was launched in 1996. Only 16 (or 32 per cent) of the original 50 constituents are still in the index. Of these, only 13 have stayed throughout. This 68 per cent churn in the Nifty in last 18 years is fairly high, but not extraordinary. The 30- share Dow Jones Industrial Average (DJIA) of the US, which is 100 years older than the Nifty, has witnessed a 400 per cent churn in the past 118 years. While the Nifty has replaced 34 companies in past 18 years, DJIA has swapped nearly 120 companies since it was established in 1896. On an average, both indices have seen a 3.8 per cent churn every year.

Most companies who have sustained success were, for the most part, paranoid, eager and willing to jettison past success in an attempt to keep up with where the world was heading next. They changed businesses, cannibalized their own successful businesses, took risks in new industries, with new approaches, and new partners, knowing that what worked yesterday isn’t necessarily going to work tomorrow.

Even in the case of Individuals, as per a study, even the Forbes list of billionaires has a 60% turnover every decade. Many traditional Indian Business families like the Modis, Bangurs, Dalmias, have been replaced by the Ambanis, Mittals, Munjals and many such new generation Entrepreneurs.

Most people think making money is more difficult compared to managing it. Studies have shown that an estimated 70 percent of people who receive a financial windfall — a large amount of sudden money — won’t have any left within a matter of a few years.

There are numerous examples of many successful and rich people who become wealthy and loseit all in no time. Sportspersons, movie stars, Investment bankers, professional managers, business czars and many others who receive a windfall. These wealthy people make tons of money, earning is not an issue, But they also loose it in quick time, filing for multiple bankruptcies.

Why does it happen?

What is the problem in holding on to those billions? Even a conservative return on investment would be enough for them to take care of their life style expenses. Isn’t it?

I don’t have an intelligent answer to this situation. Common wisdom tells us that they must be spending multiple times than their earnings to get into this situation. Or they may be making poor investments, not creating a passive income, taking unnecessary leverage to make bigger investments, gambling and taking unnecessary risks or someone managing their moneymay be squandering it or taking a bigger share for himself over the top.

Most fortune receivers end up buying liabilities dressed as assets; summer beach houses, High end cars and so on which not only consumes expensive capital but also has huge maintenance costs and the “asset” depreciates over time. As they say, “wine is not an asset, if you consume it as soon as you buy it.”

In my opinion, managing money is all about controlling your risk. Take where you need it and avoid where it should be.

Most have the problem in understanding their own risk profile and decide what is good for them. They also overestimate their risk taking ability and financial capacity and end up in precarious situations.

I came across a wonderful story, which I shall like to share to further illustrate the point.

“Abraham Germansky was a multimillionaire real estate developer in 1920s. He also loved stocks, betting heavily as the market boomed. As the crash of 1929 unfolded, he was wiped out and that was basically the end of Abraham Germansky.

Germansky disappeared on October 24th, 1929. The New York Times posted a short story near the back of its October 26th edition, with Germansky’s lawyer, Bernard Sandler, asking for information on his whereabouts. It tells a powerful story in just a few words.

Later that week another investor in the same city had a very different experience.

Jesse Livermore returned home on October 29th to a wife who, seeing news of the day’s record market crash, was prepared to console her husband and return to a life of frugality.

Jesse said that wasn’t necessary. He was short in the market and made more money in the crash of 1929 than during the rest of his life combined.

“You mean we are not ruined?” his wife asked, according to Livermore’s biography.

He replied: “No darling, I have just had my best ever trading day – we are fabulously rich and can do whatever we like.” He made, in one day, the equivalent of $3 billion.

But fast-forward four years and the stories end up nearly identical.

Livermore made larger and larger bets, and went on to lose everything in the stock market. Broke and ashamed, he disappeared for two days in 1933. His wife set out to find him. “Jesse L. Livermore, the stock market operator, of 1100 Park Avenue missing and has not been seen since 3pm yesterday,” the New York Times wrote in 1933.

Livermore was one of the most skilled people in the world at getting rich. He made and lost at least four fortunes, never going more than eight years without flirting with bankruptcy.

After his third wipeout, Livermore recognized his mistake: Getting rich made him feel invincible, and feeling invincible led him to double-down with leverage on what worked in the recent past, which was catastrophic when the world changed and the market turned against him.

He returned each time, but his path was set. Livermore lost it all and eventually took his own life.

The timing was different, but Germansky and Livermore shared the realization that getting rich is one thing and Staying rich is quite another.

Another thing that you must understand is that there is a huge difference between making lots of money and being rich. Income is not the same thing as wealth. Those who earn a high income give themselves a better chance of becoming rich but there is far more temptation to inject extreme lifestyle inflation into the mix when you earn a bigger paycheck.The difference between how much you make and how much you spend is often a tug of war between ego and humility.

A recent study of 2,523 people around the world with an average net worth of $7.6 million offers a perspective on how the rich stay rich and where they invest their money.Research firm Scorpio Partnership and BNP Wealth Management surveyed the millionaires in 17 countries about where they invest their fortunes. Not only was the breakdown of how the rich stay rich interesting,but also the differences across the globe were quite surprising.Some quick takeaways from the survey: