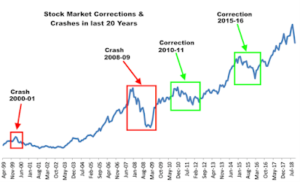 Analysis of historical data points to the fact that after every correction, markets reward the investor handsomely, who displays courage to invest and stays invested during a downturn.

According to a study done by investment firm Deutsche Bank, the stock market, on an average, has a correction every 357 days, or about once a year. While many investors, especially those new to Equity investing simply aren’t used to experiencing swings like these but corrections are an inevitable part of stock market, and there’s nothing you can do as an individual investor to stop a correction from occurring.

In a broader context, while a stock market correction is an inevitable part of stock ownership, corrections last for a shorter period of time than bull markets.

Based on research conducted on the Dow between 1945 and 2013, John Prestbo at MarketWatch determined that the average correction (which worked out to 13.3%) lasted a mere 71.6 trading days, or about 14 calendar weeks.

Stock market corrections may be inevitable, but they are rarely predictable.

Stock market corrections could come about within any time frame (every few months or after multiple years), and they can be caused by a variety of issues like worsening Macros, Earnings dip, Liquidity issues, Global factors or sentiment related issues.

Another important point you should realize is that stock market corrections really aren’t an issue if you remain focused on the long term goals. The only people who should be worried when corrections roll around are those, who’ve geared their trading around the short term, or those who’ve heavily leveraged their account with the use of margin.

A stock market correction is a good reminder for long-term investors to reassess their holdings.

As noted above, a dip in stocks isn’t necessarily a bad thing. It gives you the opportunity to buy or add to your stocks in high-quality companies. Ask yourself one simple question with each stock in your portfolio: Is the reason I bought this stock still valid today? If the answer is “yes,” then no action is required.

Some investors may be wondering how long with this volatility will continue or for how long will the market fall.

It is not possible to predict what the stock market will do in the near term, but historical data shows that, corrections or even bear markets do not last for very long.

Historically, a 10 – 15% correction usually lasts for about 3 to 4 months – the market then bottoms out and up trend resumes. The Nifty-50 has fallen about 12-13% from its all time high in the last couple of months. The market can fall a few more percentage points, but as long as the correction is within 10 -15%, investors can expect the market to start recovering within a few months.

Since 1991 we had seven bull markets and six bear markets of varying time periods and intensity.

The bull phase from 2012 to 2015 also doubled and gave impressive returns a.

The bear phases were also sharp and swift.

The global financial meltdown of 2008, undoubtedly the worst in recent history, shaved of 63 per cent from the Indian markets in 14 months.

Some periods were characterised, not by crashes, but by prolonged phase of stagnation and drift.

This happened during September 1994 to November 1998 during, which the indices moved only sideways and drifted. Within these major and longish economic and market cycles, there were short bouts of sharp upswings and downswings.

But, the important take away is that, over the long run, both the economy moved to a higher growth trajectory and the markets move to higher levels.

Each of these corrections lasted for 12 months or less. Even the crash of 2008, when the market fell more than 60%, it recovered in 14 months.

However, considerable price damage may be done to some stocks in a bear market and these stocks may take much longer to recover, if at all.

Volatility, Corrections and Bear market all look the same at the beginning. If the market is down 6 – 7%, how do you know if it will fall 10% (correction) or 20% (bear market)?

You cannot know. You have to be patient. That is why it is said, “Never try and catch a falling knife.”

The best strategy in a bear market is not doing anything- remain calm and remain invested. If you want to invest in a correction or a bear market, then do it through a SIP or a STP over a period of 6-12 months.

Secondly, go back to fundamentals, look for real value buys, good quality companies which are available at a discount and start accumulating. These drawdowns are the best times when the stocks are available at discounts.

Don’t get worried about corrections, they are inevitable and a part of the investment journey.