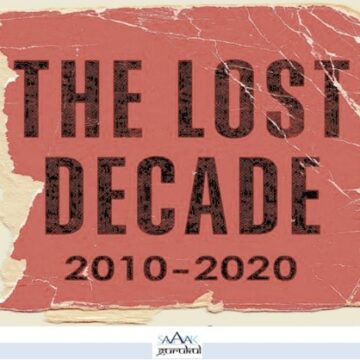 The teens were supposed to belong to the emerging markets and BRICS, especially to India.

The sixties and seventies of the last century belonged to the USA, the eighties to Japan, End nineties and the first decade of the current centurybelonged to China and the teens were to be India’s decade.

But alas, India has faltered in the last decade, the momentum seems to have been lost. When India’s economic history is written at some future date and when a serious examination is undertaken, of when exactly India lost its way with its tryst with destiny, the decade of 2010-20 will be highlighted.

The impact of poor growth on the stock market was clearly evident and the Indian stock Markets delivered the worst returns for the decade. The decade truly belonged to the US and the Nasdaq gave the best returns.

The facts speak for themselves. India’s real GDP growth was at its peak in March 2010 when it scaled 13.3%. The nominal GDP at that point was over 16.1%. In comparison, the nominal GDP in September 2019 was at 6.3%, its lowest in the decade. Since then, the downward trend is evident and we are now nearing a bottom at about a real GDP growth rate of 4.5%.

This has happened in a period when the world GDP has done better than expected and the interest rates, have come crashing across the world in the last two decades. We have not been able to take advantage of the abundant and cheap Capital available, which India is in urgent need of.

The India growth story definitely has slackened and the gap between India and China has only widened. The reason why growth is important for a country like India is mainly due to the fact that the only way we can bring our hundreds of millions of people out of poverty and give them the basic amenities and a decent standard of living is only by achieving high growth levels. The aspirations of the teeming youth and the demographic dividend can also be reaped, only by a double-digit growth or else it will result in social unrest and other problems.

The decline in the promise is amply evident by the change in the composition of the economy during this decade. In 2010, agriculture contributed 17.5% of GDP, while industry contributed 30.2% and services 45.4%. In 2019, agriculture fell to 15.6%, industry to 26.5% and services increased to 48.5%. The share of industry has been sliding. This is the typical profile of a post-industrial economy. The irony of India becoming post-industrial without having industrialised  cannot be missed. Another irony is that 60% of our population still continues to be engaged in agriculture and related activities.

The savings/GDP ratio has been in a declining trend since 2011 and Prime Minister Modi has been unable to reverse it. Consequently the tax/GDP ratio and the investment/GDP ratio have also been declining. The drivers of economic growth such as capital expenditure are dismal. Projects funded by banks have declined by over half since 2014 to less than Rs.600 billion in 2018-19. Projects funded by the market have dropped to rock bottom. Subsequently the manufacturing/GDP ratio is now at 15%. Corporate profits/GDP ratio is now at a 15-year low at about 2.7% almost half of what it was at the start of the decade.

The decline began in the early years of the decade when capital expenditure growth began tapering off mainly due to anti-corruption crusade, rise of the green brigade and the increasing assertion of populist tendencies by the government at the cost of the much needed investment in infrastructure. The decline in the share of capital expenditure was accompanied by a huge expansion in unmerited subsidies. Instead of an increase in expenditure on much needed education and healthcare, there was a huge expansion in subsidies to the middle and upper classes like on LPG and motor fuels. Even fertiliser subsidies, which mainly flow to middle and large farmers with irrigated farmlands, saw a great upward leap and the money for this came at the cost of reduction in capital expenditure.

The change of government did not change or reverse the trend, and only inflicted more hardship by demonetisation and ill timed rollout of the Goods and Services Tax. Stricter tax compliance norms, The bankruptcy code and the impact of headline news of NPAs on industry, RERA, emphasis on environment, and its impact on certain industries, the strict actions by the Central enforcement agencies against erring businesspersons and government officials  ala Mallya, Bhushans, Unitech, Sahara,Chanda Kochar, etc also affected the market sentiment adversely.

The situation came to such a pass that the Businessmen were not willing to borrow and bankers were not willing to lend. Credit offtake and both corporate and retail lending fell sharply, leading to decline in both investment and  consumption spend.Inflation targeting and focus on fiscal deficit ensured that Government spending was also muted, Geo political factors and trade wars ensured that exports could not grow. The government’s protectionist stance and non-participation in major trade agreements like RCEP have also not helped.

Gloom surrounds the start of the 20s. The euphoria of the 2000s has been replaced by  disappointment as the 2010s ended. This is not just a cyclical downswing.

India could have achieved what economists call a ‘take-off’ (rapid and self-sustained GDP growth) but has lost the momentum.

Something deeper has gone seriously wrong, something more structural, a deeper malaise which needs to be corrected. Was the disruption solely political or did the businesses not anticipate the change?In the 2010s, each time the country’s economy came close to returning
to previous growth trajectory, political events have knocked it off course.

Did we grow too fast and our systems didn’t keep pace because the reforms process gave way to populist measures?

Is it possible with our present outdated judicial system which is largely a British legacy or the current labour and land laws?

In the 1990s, India gradually dismantled a very uncompetitive industrial structure created during decades of protection behind high tariff walls. This paid off in the 2000s. India soared to world-class in three main sectors — IT, pharmaceuticals and auto.

Software companies like TCS, Infosys, Wipro and Cognizant became worldleaders. Reliance became a global giant in oil refining and petrochemicals. Bajaj Auto and Hero Honda re-invented itself as world-class motorcycle producers. Maruti grew to a size bigger than its parent and brought about a small car revolution.The automobile sector became a global hub for not just the production of small cars but even R&D. Auto ancillaries started supplying to all the leading manufacturers of the world. Drug companies like Sun Pharma, Dr Reddy’s Labs and Lupin become major global suppliers of generic drugs.

Alas, not a single new world-class sector has come up in India in the 2010s. Albeit, many top corporates, including new post-liberalisation stars like Essar, Ranbaxy, Zee, Jaypee, Bhushan, Videocon, Jet Airways, Anil Ambani and several infrastructure companies have crashed.

The only new giants have come up in the teens are the “unicorns” (unlisted companies worth a billion dollars) such as Flipkart, Ola Cabs, MakeMyTrip, Byju, Paytm, Swiggy etc . The sad part is that they all are are imitators of Western e-commerce models and lack the technological innovation of China’s Huawei, Alibaba or BYD.

Most Indian unicorns are loss making and are majorly owned by foreign investors. They don’t seem to have what it takes,and India cannot expect them to catapult the country into the next level and make India a global force.

Why can’t our top corporates in the manufacturing, financial services, hospitality, FMCG etc. become world leaders and the cherished brands of the world. The Indian corporate giants are content to remain within the shores and don’t seem to be focused on the much-needed innovation and R&D. Where is our own “Apple”, or Google or Microsoft or Facebook or Adobe? Why can’t our telecom giants do some integration and create their own Oppo or 1 Plus or Samsung given the volumes and huge subscriber base that they have.

Make in India doesn’t seem to be working, can we graduate to “Innovate in India?”When you are short of capital, the best way for growth is to raise productivity, make better use of available resources and do more value addition.

We have the brain and the resources; can we channelize it and give it a platform to raise the bar.

The government has to make Economic recovery and growth its highest priority because politics can wait but the economy cannot.

Ease of business has to improve not only in rankings but in spirit and down the line of control.

Sentiment has to be conducive for investment, investor has to be assured of continuity in policy and that contracts will be enforced and will not change midway due to change of state governments or heads of important ministries. The consumer has to be made to believe of a bright future ahead, not by talk but by deeds so that he is not afraid to dip into his savings and spend on not only necessities but discretionary and luxury items too.

The start of the new decade is the best time to make a new beginning. It doesn’t start with the government alone, the responsibility is not theirs alone, we all have to share the burden by changing the way we operate, we conduct our businesses and our lives.

The first change will have to be in ourselves, so that the ethos can change to one of continuous and responsible growth.

Have a great decade ahead.