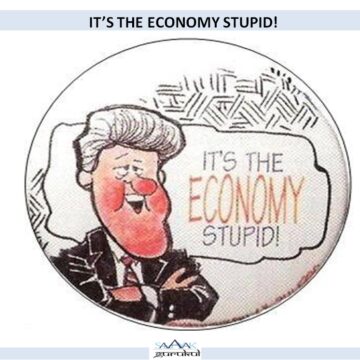 “It’s the economy, stupid” is a slight variation of the phrase “The economy, stupid”, which James Carville coined for Bill Clinton’s successful 1992 Presidential campaign against sitting president George Bush.

Carville’s original phrase was meant for the internal audience of Clinton’s campaign workers as one of the three messages to focus on.

Clinton’s campaign advantageously used the then-prevailing recession in the United States as one of the campaign’s means to successfully unseat George H. W. Bush. In March 1991, days after the war in Kuwait, 90% of polled Americans approved of President Bush’s job performance. Later the next year, Americans’ opinions had turned sharply; 64% of polled Americans disapproved of Bush’s job performance by August 1992, just months away from the Elections.

Keeping the above in mind, lets understand why is the Economy and economic growth so important especially for an emerging market like India?

The unfortunate part is that the Government till recently, when the FM started her weekly relief sessions has been in complete denial of any slowdown or economy in distress. Other than the finance minister and the RBI, the rest of the government in New Delhi seems strangely disengaged with macro-economic policy issues. This is hard to understand when the economy faces an escalating unemployment problem, a crisis in farming, stagnation in manufacturing, low levels of capital investment, poor business sentiment, slack exports and de-accelerating growth.

Most political debates are still centered on what the UPA did “wrong” and the NDA “corrected”, but after more than 20 quarters in power, that excuse will also lose relevance very soon.

At times, it seems that NDA, which always had a right of center orientation, is now increasingly moving towards a left of center outlook, after having successfully garnered the harvest of handouts in the previous regime. The tax on Ultra rich in the recent budget to finance the handouts to the underprivileged just reinforces the point.

Not to say that the underprivileged should not be favoured, but we rather have the social spending from tax buoyancy of economic growth than at the cost of much needed infrastructure boost.

The economy has not been totally ignored in these past 100 days. There have been some steps which have been taken; the mega-merger of government banks has been undertaken, further opening up to foreign investment, some of the new legislation is also economic in content.

Two new labour codes, an amendment to the bankruptcy law, on its part, the Reserve Bank has also announced two rate cuts. The release of Rs 70,000 crore for public sector bank (PSB) recapitalisation, transmission of rate cuts by banks and process driven “one-time settlement” for MSMEs will hopefully get a number of them back on the path of progress.

The faceless tax assessment and increased transparency would surely be a step towards lesser harassment. The refund of GST within 30 days and clearing off the pending payments due from the government, as well as CPSEs will provide the much-needed working capital to the MSME sector. NHB’s Rs 30,000 crore additional liquidity support to HFC will ease some woes of the real estate sector. The reversal of enhanced surcharge on equity capital gains for foreign and domestic investors was the most anticipated rollback and should be a sentiment booster.

They say half the problem is solved when you start acknowledging there is a problem. The government is finally prepared to accept the ground reality and willing to take corrective action. Although the announcements by the FM is not a remedy for all the economic woes, it signals a step in the right direction by a government, which is now willing to listen and course-correct.

More importantly, the entrepreneurs and taxpayers are now being seen as “wealth creators” and not “villains”.

The signals globally seems to indicate that nominal growth rates are expected to slow across the world which will definitely affect India’s nominal GDP growth also. With inflation consistently below 4%, that may translate into nominal growth rate of 8-9 per cent. If you extend this line of argument further, nominal growth in single digit implies a similar rate of corporate earnings growth thus leading to challenges of valuation premium, currently enjoyed by the Indian stock market.

The commentary in recent times has shifted abruptly to issues such as: whether the current slowdown is more structural than cyclical, Can the slowdown get worse? How long will it last? What are the prospects for the medium-term? Will we see robust economic growth in the next five years and will we achieve the target of $5 Trillion economy by 2024?

However, there are larger ramifications to economic under-performance, which go beyond the basic. Its like the team which wins or the student who tops the exam has all the sins pardoned and no one questions the means or methods adopted, but if you lose or don’t qualify, the critics have a ball. Similarly, The impact of Economic slowdown has major consequences. Apart from the economic impact, it can also have social and political impact and affect India’s strategic role in the present Geo political system.

Macroeconomic growth translates into greater top line opportunities for individuals and organizations. It means an increase in jobs and household income and tax revenues for the Government. It offers greater flexibility to all concerned to spend on the priority areas.

A low rate of economic growth can cause higher unemployment, which in India can be a major concern because more than a million young people are ready to join the workforce every month. The low growth and higher unemployment can have major consequences both social and economic.

The high level of social spending required for infrastructure development, improving the quality of life and even fulfilling the basic needs of the underprivileged can only come from tax buoyancy and economic growth.

If growth stalls, the country will also lose its most strategic asset – an image of a stable, high growth emerging economy with a huge domestic consumption led economy, every country wants to be associated with. The world’s largest economies and the powers invite us to the biggest roundtable only because of this and not for any love that they may have for us.

When your economy is growing at 8 per cent or above, and you are a growing market for the worlds biggest producers and companies, every Uri, or Balakot or Sec 370 reversal is overlooked and pardoned but the moment you are at sub 5% growth and a restrictive unattractive market, you are just another bumbling third world economy with a sub $2000 per capita income not able to handle its restive billions and nobody wants to be associated with you.

In a changing world order, a country’s importance is linked to the future promise of its markets. These perceptions lay at the heart of the US’ and G-7 nations re-engagement with India as a strategic ally and emerging power. If growth falters, India is less likely to be viewed in the region, as a natural foil to China.

The world leaders embracing Modi Ji in warm hugs is not due to his charisma or personal affection but due to the bigger market and demographic advantage, which India offers.

The impact of low growth and its resultant effect will definitely have political fallout out too. Public memories are short lived; the experience of Rajiv Gandhi, VP Singh & Vajpayee Ji is a reminder of what the voter adulation and subsequent indifference can do.

All in all, the Modi government has its task cut out in reviving growth. What it does in the next 12-18 months, will determine the future trajectory of the Indian economy. But will it be enough to keep the Indian masses happy and gainfully employed, and its growing geo political importance intact, only time will tell.

Meanwhile, Iam reminded of an old story, Baron Rothschild, an 18th century British nobleman and member of the Rothschild banking family, is credited with saying that “the time to buy is when there’s blood in the streets.” He should know. Rothschild made a fortune buying in the panic that followed the Battle of Waterloo against Napoleon.

They say, “Good news and good price never come together.” Bad news always leads to good valuation and the current market is also providing an opportunity to build your portfolio with a reasonable margin of safety.

Note: All information provided in this blog is for educational purposes only and does not constitute any professional advice or service. Readers are requested to consult a financial advisor before investing as investments are subject to Market Risks. About The author