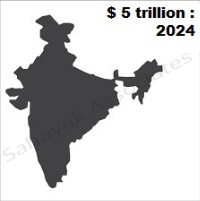 From the Ramparts of the Red Fort, Prime Minister Narendra Modi declared on the 15th August: “The goal to make India a $5 trillion economy by 2024 is challenging, but achievable.”

By a simple CAGR calculation, The Indian Economy needs to grow at 13.11 % nominal rate to achieve the desired figure by 2024.

Assuming the Current year GDP real growth rate of 7%, inflation of 3.4% and a constant Rupee Dollar exchange rate, we should touch $ 3 Trillion by the end of this year. Hence, we shall have to grow @ 13.62 % Nominal rate to achieve the target by 2024, when the next Elections take place, and that assuming the Rupee Dollar rate stays at current level because we are talking of a GDP in $.

The Journey of Other Nations:

To get a better idea, lets compare the proposed Indian journey with similar economies and how they completed the journey from $ 1 trillion to $ 5.0 Trillion.

What does the Journey Mean?

Just to get the perspective right, each Trillion Dollars addition means, we shall be adding an economy the size of Indonesia or 1.25 times Saudi Arabia or more than three times the Pakistan GDP every year.

At a GDP of $5 Trillion, our per capita income will touch close to $4000 which means the average household Income of a family of four will be close to

Rs 100000 per month. This will also reduce the people below poverty line by more than half to less than 200 Million.

When the economy grows and per capita income rises, discretionary spending is the first area, which is impacted, and consumption shoots. As income levels rise, The % spend of on the basics comes down, Maslow starts taking over and you start moving up the hierarchy of needs. India’s potential to consume is huge as penetration levels in most industries are very low.

Just to illustrate, In China, The air conditioner penetration went up from 7% to 70% during its journey from $ 1 Trillion to $ 5 Trillion. India is today at a 15% penetration level and even if it reaches 50%, you can imagine the kind of boom in the air conditioner market it will produce. Nowadays the word Auto is spoken with a word of caution and skepticism. Without going into details, I shall just like to mention that Indians bought 3.3 million cars (Four wheeler passenger vehicles) in 2018 and Indians bought more than 20 million two wheelers. How long will the guy on the two wheeler remain on one and how soon will he shift to a four wheeler, despite the rise of Ola & Uber, is best answered by you alone.

Moving onto services, only 4% of Indians have any kind of Life insurance; The total profit of the 40 AMCs(asset Management Companies) comprising the Indian Mutual Fund Industry is not even Rs 4000 Crores

For a country the size of India with its teeming Billions, The ills affecting the Indian public, be it extreme poverty, unemployment, the health or nutrition parameters and other social indicators, can only be erased by sustained double digit economic growth and development. Without sustained growth at that level it has little hope of employing the roughly one million young people who join its workforce every month. Unless we take advantage of our current, favorable demographics, we are never likely to emerge as an upper-middle-income economy with a prosperous and thriving middle class.

The key to achieving the $ 5 Trillion target lies in boosting the average economic growth rate to eight per cent, keeping inflation at four per cent and working towards foreign exchange stability. If the math and economic policies by the Modi government converge, India with a GDP of $5 trillion will in 2024-25 to be the world’s fourth-largest economy, pulling ahead of Germany and nipping at the heels of Japan.

As per IMF, by purchasing power parity (PPP) norms, India with a GDP of $11.4 trillion in 2019 is already the world’s third-largest economy. Besides, if India’s informal, shadow economy – which comprises, even after demonetisation and GST, around 25-30 per cent of all economic activity – is taken into account, India’s GDP would be far larger than official figures indicate.

Can India complete the journey by 2024?

According to the Central Statistics Office (CSO), although India’s average real GDP growth during the last five years has been 7.5 per cent, it has slowed down to 6.8 per cent in 2018-19. The Indian growth has been slowing down and is down to less than 6% in the Q4 of 2018-19 and is further down to just 5% in Q1 of the current financial year.

Given the external headwinds and the twin balance-sheet problem, is it possible to push the real GDP growth to 8 percent and above, inflation @ 4% and have a stable Rupee?

The prerequisites for the kind of growth that transformed the fortunes of the Asian tigers and then China have not yet been put into place.

Till now, India has been a largely consumption driven economy with consumption contributing to more than 60% of the growth.

India must ensure the real GDP stays closer to 8 per cent mark by reviving consumption, which will directly trigger the private investment cycle.

Domestic consumption, which powers 60% of the GDP today, is expected to grow into a $6 trillion opportunity by 2030.

Credit led consumption has faced challenges in the recent times both on the buy side due to poor consumer sentiment and the sell side due to lack of liquidity and the NBFC crisis. Household Debt also has almost doubled to Rs 6.73 lac crore in the last 5 years. The rising debt is however still the lowest among most of the emerging economies with India only at around 15%,as compared to Russia: 16.5%, Brazil: 26.7% and China: 50.3%

As far as private sector investment is concerned; Given the Poor Sentiment, unviable capital cost and low capacity utilisation of barely 70 per cent, it’s unlikely corporate sector will invest in new capacity creation unless higher consumption increases the capacity utilisation to around 80-85 per cent and interest rates come down to competitive levels.

The answer lies in encouraging greenfield investments in newer areas such as defense manufacturing, promoting start ups, focusing on innovation and productivity improvement which could help trigger a revival in investment cycle.

The major contributor in Investment hence will have to be the Government investment. Modi 2.0 has already committed $ 1.4 Trillion (Rs 100 lac crore) towards Infrastructure spending in the next 5 years.

Just to get the perspective about Rs 100 lac crore right; The total free float Indian market cap is around Rs 70 lac crore, the total bank deposits in India in 2018 were Rs 118 lac crore, Total insurance assets are Rs 36 lac crore. Here, we are talking big numbers by Indian standards and about 10% of GDP to be spent on Infrastructure alone.

Given the large funding requirement, the domestic savings pool is limited. In a world awash with excessive liquidity, the time is ripe to tap into the global savings pool. India needs to attract huge foreign capital and meaningful initiatives were announced in the last budget. The Government also proposes to raise a $10 Billion Foreign Sovereign debt to raise resources for growth. The Rs 1.76 Trillion bonanza from the RBI should also go a long way towards this goal. If India can achieve the $1.4 Trillion Infrastructure investment in the next 5 years, let me assure you that the multiplier effect alone will ensure that we achieve the target before 2024.

In a world, which is increasingly becoming more protective, an impetus from world trade seems improbable. For exports to meaningfully contribute in the next 5 years, the manufacturing capacities should have already been in place. China became the world’s manufacturer in the last 25 years and managed to boost its economy largely driven by investment and exports. Japan did the same in the 70’s and 80’s when their electronics and autos flooded the world market.

Thus, We will have to depend on the changing demographics of India to push consumerism – namely rely on increasing young population contributing to a growing workforce, urbanisation and a quantum increase in average household income. Infrastructure spend, growth in value added services exports, tourism and the push in manufacturing, should be other major contributors.

$ 5 Trillion GDP and the impact on the Stock Market

Finally, how will this journey to $ 5 Trillion impact the stock market is best illustrated by the two charts below. The first gives a historical perspective of the journey so far.

The next chart gives the perspective of the journey by similar economies, i.e. the US and China and how their markets behaved in this journey.

Based on the US and the China experience and our historical journey so far, when the Indian GDP doubles to $ 5 Trillion, one can easily say that the Sensex will cross 100000.

Whether we achieve the target in 7 years or 8 or 10, we are definitely in for interesting times ahead and as Warren Buffet says, “The Tailwind is in our favour” and we should get ready to reap the harvest of our “Chronological Lottery”

Check out our earlier blogs on the subject: “Will the Sensex double under NAMO 2.0?” https://www.sahayakassociates.in/resources/our-blog/2553-sahayak-associates/sahayak-associates-blog/8755-will-the-sensex-double-under-namo-2-0 or https://sahayakgurukul.blogspot.com/2019/06/will-sensex-double-under-namo-20.html and our blog on “Chronological Lottery” – The art of Being invested at the right place, at the right time, in the right asset class.

Sandeep SahniSandeep is an alum of IIM Lucknow with a Post Graduate Degree (MBA class of 1988). His also an alum of Shri Ram College of Commerce, Delhi University (B.Com. Hons. Class of 1985.)Sandeep’s investing experience and study of the Financial Markets spans over 30 years. He is based in Chandigarh and has been advising more than 500 clients across the globe on Financial Planning and Wealth Management.He has promoted “Sahayak Gurukul” which is an attempt to share thoughts and knowledge on aspects related to Personal Finance and Wealth Management. Sahayak Gurukul provides financial insights into the markets, economy and Investments. Whether you are new to the personal finance domain or a professional looking to make your money work for you, the Sahayak Gurukul blogs and workshops are curated to demystify investing, simplify complex personal finance topics and help investors make better decisions about their money.Alongside, Sandeep conducts regular Investor Awareness Programs and workshops for Training of Mutual Fund Distributors, and workshops and seminars on Financial Planning for Corporate groups, Teachers, Doctors and Other professionals. Through his interactions and workshops, Sandeep works towards breaking the myths and illusions about money and finance.He also writes a well read blog; https://sahayakgurukul.blogspot.com https://www.sahayakassociates.in/resources/our-blogHe has also conducted presentations, workshops and guest lectures at Management institutes for students on Financial Planning and Wealth Creation.He can be reached at:+91-9888220088, 9814112988sandeepsahni@sahayakassociates.com         Follow us on:www.sahayakassociates.in  www.facebook.com/sahayakassociates www.twitter.com/sahayakassociat,https://www.instagram.com/sahayakassociates https://sahayakgurukul.blogspot.com https://www.sahayakassociates.in/resources/our-blogBlog Comment Policy

Your thoughts are vital to the health of this blog and are the driving force behind the analysis and calculators that you see here. We welcome criticism and differing opinions. We will do our very best to respond to all comments ASAP. Please do not include hyperlinks or email ids in the comment body. Such comments will be moderated and we reserve the right to delete the entire comment or remove the links before approving them.