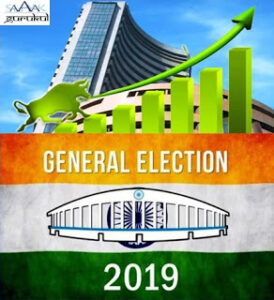 Are you worried about the impact of the General Elections on your Portfolio?

As the country moves into the Election mode and gets ready for the General Elections in May 2019, there will be a lot of noise in the media. The ruling party will make tall claims of their achievements whereas the opposition will ridicule all claims and highlight the broken promises. Parties will set out their Economic Agenda and make tall promises. The market will react to the roadmap laid out for the next five years by different parties and pray for stability. Most noise is negative and generates negative sentiment and uncertainty in the investors mind. The general commentary in the run up to elections could become quite cautious and ominous at times.

As a result most investors are getting wary. The investment decisions are being either put on hold or delayed. Many investors today are scared about the outcome of the approaching Lok Sabha elections and how it will impact their portfolios and are moving their money into steady and safe avenues to ride over the anticipated volatility.

Stock markets have always favoured a stable government, which can offer good economic reforms; and policies, which promote growth of the Economy.

However, Dalal Street is known for knee-jerk reactions to election outcomes.

The market hit the lower circuit on the results day in 2004, when the Ruling party did not retain power, but the fact is that we had the proverbial “mother of all bull runs” from 2004 till 2008 andit went up nearly 5 times during that period.

While short term market gyrations cannot be ruled out, any unexpected developments may well cause these; our practical observation and data analysis shows that, over the years there is no correlation between market reaction to electoral news and its subsequent trajectory.

However, this time around the elections are no longer expected to be a “Black Swan” event, as the recent State polls results have already prepared the market for possible different outcomes.

Below, we present the data on the market returns during various regimes. The market does not favour any government, be it a clear majority, a minority government or a coalition, UPA or NDA, Congress or Janata Dal or BJP; the market treads its own path based on parameters other than the ruling government. The markets only favours earnings and growth and follows them consistently.

As can be noticed from the chart below, there is no pattern in S&P BSE Sensex returns during the year in which elections were held or in years before or after the elections.

We further studied the market trend and growth trajectory One year before and One year after the General Elections and once again found no co-relation between Elections and the stock market returns.

The current government has made some path breaking reforms like GST, increasing the tax base, NCLT, Banking sector reforms. It has taken positive measures for reigning in the twin deficits within agreed parameters. The creation of Infrastructure, building of Highways has been given priority and the government has taken several steps towards Digitisation, Financial inclusion for all sections of society, Direct money transfer and ease of doing business, apart from several social sector reforms.

We are likely to see the benefits of these measures over the next five years, whoever comes to power. The macros are turning benign and favourable, Earnings growth momentum is picking up and green shoots are now visible in the resolution of the Banking & NBFC sector. Inflation is under control and within RBI defined parameters; that combined with moderation in oil prices will   ensure a Dovish RBI stance going forward.

Rural sector stress and Unemployment are two major areas needing immediate economic attention. Trade wars and the slowing world economy will be the International worrying factors. However, some problems will always remain, there will always be a niggle or a cut happening somewhere; you can never have all factors playing positive and favourable in the market.

With the Indian Economy expected to touch the $ 5 Trillion mark in the next 5-7 years, the going appears to be good. Hiccups may happen, there will always be volatility; that is the nature of the Stock market. Learn to bear with it.

Keeping this in mind, you are better off keeping the conviction, and focus on economic and corporate numbers. A serious investor with a long-term horizon, should buy into any kind of major dip in the markets. Volatility in the current year will provide repeated opportunities for bottom up stock picking and bargain hunting. Don’t lose the opportunity.

Returns backed by strong fundamentals and earnings growth can only be delayed, but can never be denied.

Consult your financial advisor, continue your SIP, follow your asset allocation strategy and keep investing to achieve your financial goals. The Elections are just another event in the calendar.