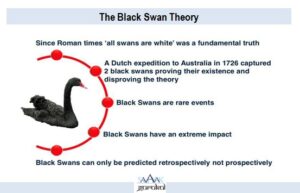 Black Swan….An event or occurrence that deviates beyond what is normally expected of a situation and that would be extremely difficult to predict.

The phrase “black swan” derives from a Latin expression; its oldest known occurrence is from the 2nd-century Roman poet Juvenal’s characterization of something being “rara avis in terris nigroque simillima cygno” (“a rare bird in the lands and very much like a black swan”).

When the phrase was coined, It was presumed that Swans can only be white and the black swan was presumed not to exist.However, in 1726, Dutch explorers on an expedition became the first to spot Black Swans in western Australia. The term subsequently metamorphosed to connote the idea of a perceived impossibility that might later be disproven.

Black swan events were first discussed by Nassim Nicholas Taleb in his 2001 book “Fooled by Randomness”  which concerned financial events.

His 2007 book, “The Black swan” extended the metaphor to events outside of financial markets. Taleb regards almost all major scientific discoveries, historical events, and artistic accomplishments as “black swans”—undirected and unpredicted. He gives the rise of the Internet, the personal computer, World War 1, the dissolution of the Soviet Union, 9/11 attacks  as examples of black swan events.

Taleb, a finance professor, writer, and former Wall Street trader wrote about the idea of a Black Swan Eventjust prior to the events of the 2008 Financial crisis. Taleb argued that because black swan events are impossible to predict due to their extreme rarity, yet have catastrophic consequences, it is important for people to always assume a black swan event is a possibility, whatever it may be, and to plan accordingly.

Taleb describes a black swan as an event that

1) is beyond normal expectations, that is so rare that even the possibility that it might occur is unknown,

2) has a catastrophic impact when it does occur, and

3) is explained in hindsight as if it were actually predictable.

For extremely rare events, Taleb argues that the standard tools of probability and prediction such as the normal distribution do not apply since they depend on large population and past sample sizes that are never available for rare events by definition. Extrapolating using statistics based on observations of past events is not helpful for predicting Black Swans, and might even make us more vulnerable to them.

Our inability to predict black swans matters because they also can have such severe consequences. Inconsequential events, regardless of how unpredictable, are obviously less interesting.

The last key aspect of a black swan is that as a historically important event, observers are keen to explain it after the fact and speculate as to how it could have been predicted. Such retrospective speculation however, does not actually help to predict black swans.

His best-selling 2007 book about unpredictable events,  seemed eerily prescient of the terrible downturn starting later that year. An imploding banking system and a nationwide decline in housing prices hadn’t been seen since the Great Depression.

2)The impact was extremely bad, with a loss of more than $ 2 Trillion in global economic growth.

3)The risks seemed obvious in hindsight: a housing bubble bordering on mania, complicated and novel financial products, and rising interest rates. But in real time, not so much.

There was your textbook black swan.

More than that, it gave investors and academics a conceptual framework for thinking about potential risks that were both highly destructive and low probability.

He later used the 2008 financial crisis and the idea of black swan events to argue that if a broken system is allowed to fail, it actually strengthens it against the catastrophe of future black swan events. He also argued that conversely, a system that is propped up and insulated from risk, ultimately becomes more vulnerable to catastrophic loss in the face of rare, unpredictable events.

The Covid 19 breakout or the Coronavirus pandemic, on the other hand, is actually a bad fit for Taleb’s definition. Yes, it is carrying an extreme impact, in terms of human lives, dislocation, lockdowns and economic losses. More than one third of the Global wealth amounting to close to $ 30 Trillion invested in Equity markets has been already lost. The Economic loss, as per current estimates and based on current situation is expected to shave off the World Economic Growth and bring down world output by $ 2-3 Trillion at the least.

What started out as being seen as a regional crisis, largely confined to China, has now quickly morphed into a global pandemic. It is also painfully obvious that most countries of have been badly caught out by the Covid-19. They were complacent, unprepared and are now scrambling to control the spread of infection.

There is sheer panic in financial markets and supermarkets alike. There is no visible enemy. Our mighty armies can’t target anything. There is no quick way we can solve the underlying problem. The world is going into lockout or curfew or quarantine to flatten the curve for medical responsiveness. On the financial front, everyone is going into a preservation mode, trying to de-risk and move into cash.

It is now inevitable that the world economy will go into a recession. The only debate is whether this is a technical two-quarter event or something longer and deeper. In a typical recession, corporate earnings decline and markets fall by 25-30 per cent. This, however, is unlikely to be a typical recession, as it is a sudden stop to the global economy. Many sectors are going to face severe stress, as consumption evaporates and supply chains collapse. We have no idea how long this will go on. The central banks cannot solve this crisis. It requires action from government. This is primarily a public health crisis, which will morph into a financial crisis. Before this ends, we will most likely see bailouts of the airlines, hospitality and leisure industries. No rollover of Debt may be possible for Trillions of Dollars of outstanding debt leading to  Debt defaults and downgrading of institutions.

Everybody wants to be in cash today. Redemption pressure has hit many of the high-yield funds and ETFs. These redemptions are hitting when the banks have cut back on their market-making, leading to illiquidity and dislocations in prices. Margin calls are leading to further falls of the stock market.

But the question to be asked is “Was the emergence of such a dangerous virus really an unpredictable outlier that suddenly swooped in from outside our “regular expectations?”  If asked, many could easily cite several dangerous global outbreaks from the past two decades: SARS in 2004, H1N1 in 2009, and the Ebola outbreak in 2015.

There have also been various writings and movies about the possibility of a similar event in the past.

The Post Covid 19 world dynamics will definitely be vastly different. The world will definitely move away from the Global optimised world, without any slack, that we live in and  had got used to.

Industries and businesses will re-engineer their internal work processes and rework supply chains. Policymakers will have to rethink accepted wisdom.Global trade, the mobility of corporate capital across the globe, interlinkages, healthcare, public transport, support services and disaster management systems will all be reoriented. Insurers will have to review premium assumptions and risk coverage. Force Majeure clause may have to be reworked.

Though efforts have already started, once the spread of Coronavirus is contained, the governments across the world  will have to ensure financial stability and works towards containing the spread of financial contagion, the threat of which is also as real in the current overleveraged world.

Covid-19 also appears to be a potentially potent direct hit on consumer confidence. As commodity prices and markets fall and household wealth contracts, the cushion of the “Wealth effect” is gone, household savings rates move up and consumption falls in the near term.Thus even post Covid 19, poor sentiment is likely to keep consumers at home, weary of discretionary spending, and perhaps pessimistic about the longer term.

The pandemic will definitely force the world to question the Founding elements. The world will have to rethink, recalibrate and recalculate assumptions and hypotheses and also prepare for the future Black swans which may be any of the following or something more..

We have conquered much and shall also overcome this too.

There is an old saying “that which doesn’t kill you, makes you stronger”.

The post COVID-19 world will certainly be more resilient in many moreways;

Just keep calm, go with the flow, have faith that whatever will happen, will be for the best. Maintain social distancing, Stay Healthy and Stay safe.

Till then, Have patience, and “Patience is not simply the ability to wait – its how we behave while waiting.”