The stock markets have its own superstitions, sayings and lunacies.
Some of them are connected with certain months, some with dates and some with specific days.
Old stock market adage says “Sell in May and Go away”, “The back to school trade is always down,” and “Remember September always underperforms.”
As per the Chinese calendar, August is considered a Ghost Month and it also impacts the stock market. For example, in Hong Kong, the number of initial public offerings (IPOs) drops to their lowest levels of the year during Ghost Month.
The January effect is a belief that seasonal increase in stock prices happens during the month of January. Analysts generally attribute this rally to an increase in buying, which follows the drop in price that typically happens in December when investors, engaging in tax-loss harvesting to offset realized capital gains, prompt a sell-off.
Similarly, The October Effect is the theory that stock prices will fall in the month of October.

Black Thursday and both Black Mondays happened in October in 1929 and 1987. The 2008 Great Recession kicked off in October.

October also reminds us of Halloween which has been reserved as a mysterious day since ancient times, a time of superstitions. “The Halloween Strategy,” or as it’s also known, ‘Sell in May and go away’, is another theory and investment technique in which an investor sells stocks before May 1, and refrains from reinvesting in the stock market again until October 31.

Investopedia says that from a historical perspective, October has marked the end of more bear markets than it has acted as the beginning, so maybe October means it’s actually a good thing to celebrate.
September is statistically the worst month for investors, according to many researchers. In The US, September has had more down months compared to up months since 1928 and on average investors lose 1% in September and the average monthly return in October is 0.4%.

Some suggest that it’s as simple as the fact that when many investors choose to go on summer vacation, trading volume decreases. As the world’s leading stock markets are all dictated by cities in fairly similar temperate climate zones, the summer period is when most people working in business take their vacation, and less trading volume generally means less chance for high returns in the stock market.

The psychological impact of the crashes of 1907, 1929, 1987 and 2008 has spawned fears that the month of October is financially jinxed. Although September is statistically the worst month for investors, and there is no evidence proving anything more than a mere coincidence, The Stock Trader’s Almanac still refers to October as the “jinx month”

In the Indian Context, The biggest fall in a single month since inception happened in October 2008 which saw the Sensex crash by almost 25% per cent, from an opening figure of 13006 to a closing figure of 9788.06 and on 24th October, it touched the lowest point of 7697.39. 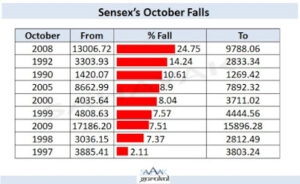 If you consider the October figures of the last 10 years, the worst was in 2009, when the index dropped 7.51 per cent in October and the best October returns were in 2010 when the Sensex gained by 9%. 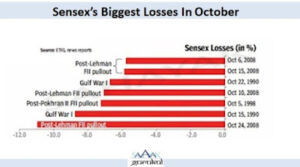 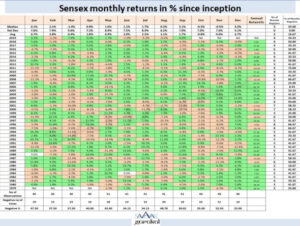 Hence statistically, as is evident from the table, there is no clear pattern available regarding any calendar or month effect on the Sensex. The returns are influenced by far too many factors and calendar impact is at best random.

We shall like to end with the Mark Twain effect, which is the phenomenon of stock returns in October being lower than in other months. The name comes from a line in Mark Twain’s Pudd’nhead Wilson: “October. This is one of the peculiarly dangerous months to speculate in stocks. The others are July, January, September, April, November, May, March, June, December, August, and February.”
The quotation is a sarcastic assertion that speculation in stocks is always dangerous. The fact that Twain specifically picks out October initially may be taken as a reference to an “October effect”, as exemplified by the 1929, 1987 and 2008 stock market crashes, which occurred in October.

As some wise men have rightly said, “Creativity is the ability to introduce order into the randomness of nature.” And “So much of life, it seems to me, is determined by pure randomness.” 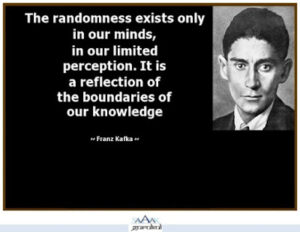 In conclusion, we feel, “The October Effect” is just one of many superstitions that distract investors from doing fundamental and technical analysis of their existing and potential investments. There cannot be any substitute for knowledge, time in the market and good advise from a financial advisor.