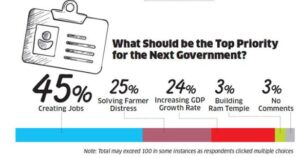 The outcome of the general election has for long been touted as a key trigger for markets in the first half of 2019.

Unlike 2014, most strategists and psephologists are still not willing to call the elections yet, though most seem increasingly confident of NDA return to power albeit with a reduced majority. The market however seems to have already priced in the NDA victory and a stable government for the next five years. This also appears so due to the phenomenon of “Active Pro incumbency behaviour and passive anti incumbency behaviour” by the different segments of the electorate.

However, The political outcome of our elections have never led to markets generating negative returns after one year. Stock market behaviour in the last 39 years during 13 different government tenures show, that when you are invested for the length of a normal term of a government, you will never lose money. Even when elections lead to short-lived government formations, stock markets did not lead to losses.

This is mainly because our country’s two main political opponents may be die-hard adversaries, but their thinking on economic policies are almost similar. If disinvestment was started by Congress, NDA continued it. If original insurance sector reforms were started by the NDA regime of Mr. Vajpayee, it was continued by Mr. Manmohan Singh’s UPA and further carried forward by the next NDA government led by Mr. Narendra Modi. Aadhaar was introduced by UPA and was further exploited by NDA with the Jan Dhan-Aadhaar-Mobile (JAM) concept, GST was initiated by UPA and implemented by the NDA.Unfortunately even the populist agenda in their respective manifesto’s is also similar in most respects.

The biggest reform budgets were presented by coalition governments. Some thinkers even feel that co-operation politics of coalitions leads to better reforms than the arrogance of an absolute majority. Hence whoever forms the government, continuity of economic policy is assured albeit with minor tweaks here and there.

Though there is an undertone of nervousness in the market at current levels, the market has held its ground after the current four phases of elections.

Of all the possible outcomes, an NDA majority may not impact the market further and the market may continue its upward journey, a NDA pre poll coalition without majority may lead to a temporary correction till things stabilise by June end,A hung parliament will lead to uncertainty and increased volatility whereasa Non BJP “Khichdi” coalition may lead to an immediate crash and a healthy correction thereafter.

At the current market valuations, a correction is very much warranted. A market which has been displaying single digit earnings growth for the last few years doesn’t deserve to trade at PE multiples of 25 plus and if politics can be a trigger for getting valuations back to the mean, so be it.

At these levels, even though the Sensex may touch or cross 40000 before 23rd May,We feel you book some profits as the probability of market correcting by 10-20% going forward is much higher than the market going up by 10% in the immediate 1-2 months, i.e. probability of Sensex touching 45000 is much lesser than market touching 35000.

Whatever the election outcome and whichever alliance comes to power, there are major economic challenges ahead. The election volatility will play out by June End and by the start of the next quarter, state of the Economy, fundamentals and earnings will once again take precedence and they will determine the market movement.

ET Magazine reached out to two of its most important constituencies — India Inc’s CEOs and readers — to get a perspective on the performance of the Modi Government and the challenges ahead.  For the CEO poll, ET Magazine reached out to over 130 CEOs and the result of the survey is outlined below which highlights the major challenges ahead whichever Government comes to power.

In the immediate term, India faces certain headwinds which need to be overcome to lay the path of sustained economic growth.

The manifesto of both the leading parties unfortunately guarantee an increased dose of populism which can only result in fiscal profligacy and adverse impact on economic growth.

We are faced with a slowing economy unable to break the shackles of low earnings growth, a critical banking and debt market crisis, unviable cost of credit, a GST reform which remains unsettled, acute rural distress in need of major structural and unpopular reforms, low credit growth due to lack of private sector capex, stagnating export growth and unprecedented unemployment levels which can translate to major social unrest. Macros especially related to Oil prices are at threatening levels once again.

However, In its strategy note, dated 6th March, Morgan Stanley says “fundamentals appear to be at the start of a new upcycle, while valuations are at mid-cycle. With PMIs expanding, corporate revenues at a 20-quarter high and corporate credit growth at multi-year highs, Morgan Stanley believes that the ballot may fade in significance as 2019 unfolds if it is right about the growth cycle.”

On the positive side, FPI’s have invested close to Rs 60000 crores in the Indian market in March and April and continue to do so. The US 1st Qtr results are not showing any signs of slowdown and continue to be robust, earnings seem to be bottoming out and monsoon predictions are indicating a normal year.

Corporate India has largely repaired their balance sheets and once capacity utilisation levels move upwards, private investment and capex will increase for the next level of growth to tick in. Corporate profits especially NIFTY profits are expected to increase due to increase in Government bank profitability, normalization of telecom earnings and lack of unexpected shocks like the Tata Motors impairment loss which should result in the NIFTY PE moving from the current 25 levels to closer to 20. At current levels, the market is more likely to experience a time correction which may last till the end of this calendar rather than a price correction.

For the long term, an Investor need not worry. Many market veterans are currently predicting a structural Bull run in the next few years as the Indian economy moves up from $ 2.5 Trillion to $ 5.0 Trillion. The US Economy doubled from $ 2.5 to $ 5 Trillion in 10 years and the Chinese Economy doubled in 5 years, India is expected to take around 7-8 years. The Indian Per capita Income will also double to $ 4000 in this period.  A doubling of Per Capita income always leads to structural changes in household spending patterns and discretionary spending. Just to illustrate, when China moved from $2.5 Trillion to $ 5 Trillion in the nineties, their AC penetration improved from below 10% to more than 60% in five years.

Fundamentals appear robust and long-term growth drivers give us reason to look at Indian Growth story positively. Even as a full-blown recovery in earnings will be key for markets, many other risks seem to be abating for now.The chances of making money over the next 5 year cycle seem to be clearly in favour of the investors.

Consult your Financial Advisor today, review your strategy and if your Asset Allocation permits, invest for the long term and reap the benefits.

(Check out our earlier  blog on the subject of Elections & the impact on the stock market – https://www.sahayakassociates.in/resources/our-blog/2553-sahayak-associates/sahayak-associates-blog/8355-elections-and-the-stock-market )

Sandeep is an alum of IIM Lucknow with a Post Graduate Degree (MBA class of 1988). His also an alum of Shri Ram College of Commerce, Delhi University (B.Com. Hons. Class of 1985.)

Sandeep’s investing experience and study of the Financial Markets spans over 30 years. He is based in Chandigarh and has been advising more than 500 clients across the globe on Financial Planning and Wealth Management.

He has also conducted presentations, workshops and guest lectures at Management institutes for students on Financial Planning and Wealth Creation.