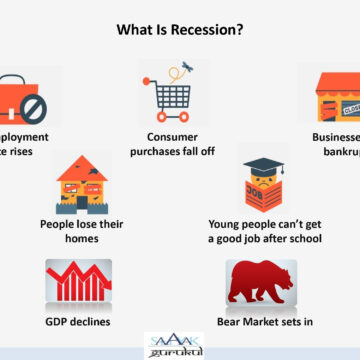 Various Dictionaries Describe recession as a period of temporary economic decline during which trade and industrial activity are reduced, generally identified by a fall in GDP in two successive quarters.

Since the Industrial Revolution the long-term macroeconomic trend in most countries has been economic growth. However, with this long-term growth there have been short-term fluctuations when major macroeconomic indicators have shown slowdowns or even outright declining performance over time frames of six month or more before returning to their long-term growth trend. These short-term declines are known as recessions.

Well-known examples of recessions include the global recession in the wake of the 2008 financial crisis and the Great Depression of the 1930s.

A depression is a deep and long-lasting recession. While no specific criteria exist to declare a depression, unique features of the Great Depression included a GDP decline in excess of 10% and an unemployment rate that briefly touched 25%. Simply, a depression is a severe decline that lasts for many years.

The average length of a growing economy is 38.7 months or 3.2 years. The average recession lasts for 17.5 months or 1.5 years. A full business cycle on average is 4.7 years.

The longest contraction or recession of record in the United States was the Great Depression in 1929 that lasted 43 months or 3.6 years. The recent recession, having begun in December 2007, lasted 18 months till May 2009. In the U.S., Until now the longest postwar recessions were those of 1973-75 and 1981-82, which each lasted 16 months each.

Effects of a recession include a slump in the stock market, an increase in unemployment, business failures and often bank failures and increases in the national debt.

The economic pain caused by recessions, though temporary, can have major, lasting effects that transform an economy. This can occur due to structural changes in the economy, as vulnerable or obsolete firms, industries, or technologies fail and are swept away; dramatic policy responses by government and monetary authorities, which can literally rewrite the rules of the game for business, in reaction to the recession; or social and political upheaval resulting from widespread unemployment and economic distress.

Numerous economic theories attempt to explain why and how the economy might fall off of its long-term growth trend and in to a period of temporary recession. These theories can be broadly categorized as based on real economic factors, financial factors, or psychological factors, with some theories that bridge the gaps between these.

Some economists believe that real changes and structural shifts in industries best explain when and how economic recessions occur. For Example, a sudden, sustained spike in oil prices due to a geopolitical crisis might simultaneously raise costs across many industries or a revolutionary new technology might rapidly make entire industries obsolete, in either case triggering a widespread recession.

Real Business Cycle Theory is the best modern example of these theories, explaining recessions as the natural reaction of rational market participants to one or more real, unanticipated negative shocks to the economy.

Some theories explain recessions as dependent on financial factors. These usually focus on either the overexpansion of credit and financial risk during the good economic times preceding the recession, or the contraction of money and credit at the onset of recessions, or both.

Psychology-based theories of recession tend to look at the excessive exuberance of the preceding boom time or the deep pessimism of the recessionary environment as explaining why recessions can occur and even persist. Keynesian economics also points out that once a recession begins, for whatever reason, the gloomy “animal spirits” of investors can become a self-fulfilling prophecy of curtailed investment spending based on market pessimism, which then leads to decreased incomes that decrease consumption spending.

There is no completely reliable way to predict how and when a recession will occur. Aside from two consecutive quarters of GDP decline, economists assess several metrics to determine whether a recession is imminent or already taking place.

The overall industrial activity has also moderated in the recent months. The construction related and investment related indicators are both showing signs of softness.

Without looking at data, the first signs on the street are clearly visible. Low auto sales and increase in inventory at the dealer level, the distress in the rural sector reflected in low rural growth in most product categories, Stalled construction projects, Same ARR and low occupancy in most hotels since the last few years, footfall drop in the Malls, Summer sales starting at the peak of summer instead at the onset of monsoon, low QSR and same store sales growth, empty toll plazas on the highway at peak holiday season are just some signs. Low occupancy at private professional colleges due to lack of suitable placements all point towards a lack of buoyancy in the Economy.

Talking to friends in the SME Industry, most honestly confess that they are not even contemplating any fresh investment leave alone thinking of expansion of existing units. Most of their time currently is absorbed by compliances rather than in promoting business and sales volume, they say. The other common refrain from the business community often heard is, “Bazaar main Paisa Nahin Hai” pointing to the liquidity problem.

Those having the resources are not wanting to invest and those wanting to invest are not getting access to funds with most financial institutions showing an aversion to fresh lending despite viable projects and excellent promoter credit history.

Failure has become a taboo and risk taking ability affected adversely after the business confidence and sentiment has hit a low due to recent economic scenario. A society, which does not encourage risk, does not encourage enterprise, which can only have an adverse impact.

The success ratio in Silicon Valley is less than 20% with a majority of Startups failing within the first two years. Since Formal businesses started, only 70-80% survive and much lesser are successful. The ratio has not changed over time but somehow Indian entrepreneurs are no longer interested in promoting new businesses due to the recent taboo of failure.

Consumption led growth has been the main driver of Indian Economy, but by all parameters of retail sales, FMCG sales, etc., consumer spending is starting to falter. Consumer spending happens from personal income and saving or from credit led spending. Individuals spend when they have disposable income, or when they feel good (Positive Sentiment) and are optimistic and positive about the future earnings. The NBFC crisis has impacted the Credit led spending growth and poor sentiment has impacted the saving led consumption growth.

Though there may not be Blood on the Street yet, but slowing economy is a certainty as also reflected in the slowing GDP growth in the last few quarters. Whether you want to technically call it a Recession or just a temporary blip/ slowdown, the semantics don’t matter.

Most economic recessions cause bear markets in equities. Since 1991 we have had seven bull markets and six bear markets of varying time periods and intensity. Technically a Bear market is when the equity markets correct by more than 20%. Historically  A bear market usually takes a year to bottom out and start recovery. In the last 10 years, the market fell more than 20% in 2008, 2011 and 2015 / early 2016 and recovered in 10-15 months.

The main stock market Indices, The Sensex & the NIFTY  need to correct; the broader market, the mid caps and small caps, are already in the Bear terrain.

Most stocks in the broader market have corrected considerably, some by more than 25%, and the small and mid caps have also undergone a time correction since the last 18 months.

We may be nearing a bottom. Though the index valuations are much above the mean, many individual stocks have started appearing attractive and are trading at close to mean and below mean valuations.

Take a relook at your portfolio, Book your profits in large caps, Start nibbling in select mid and small caps, increase your SIPs, begin your investment journey if you haven’t already, because let me assure you we are readying for a take off as the Indian GDP rushes to get past the $ 5 Trillion mark.

As with all recessions, this will also have a life as per historical average and the major part of this recession is already over before we even got time to acknowledge it in the midst of recently concluded Election frenzy.

Sandeep is an alum of IIM Lucknow with a Post Graduate Degree (MBA class of 1988). His also an alum of Shri Ram College of Commerce, Delhi University (B.Com. Hons. Class of 1985.)

Sandeep’s investing experience and study of the Financial Markets spans over 30 years. He is based in Chandigarh and has been advising more than 500 clients across the globe on Financial Planning and Wealth Management.

He has also conducted presentations, workshops and guest lectures at Management institutes for students on Financial Planning and Wealth Creation.